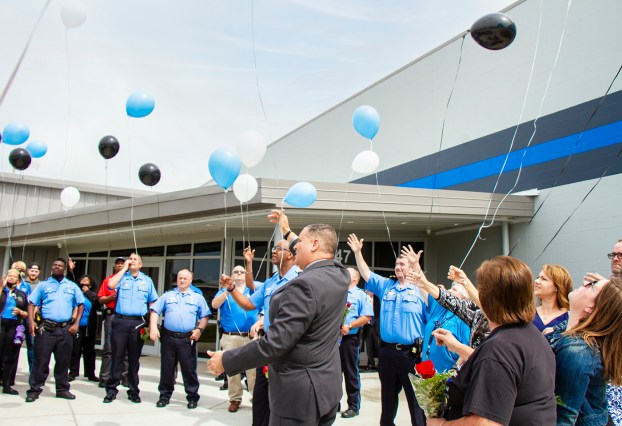 LAPLACE — During an annual memorial ceremony held May 12, a candle was lit for each of the eight members of the St. John the Baptist Parish Sheriff’s Office who lost their lives in the line of duty. Family members were on hand to light the candles and collect flowers honoring their loved ones.

In 1962, President John F. Kennedy proclaimed May 15 as National Peace Officers Memorial Day and the calendar week in which May 15 falls as National Police Week. This was the first year the Fallen Officers Memorial Ceremony was held at the Lloyd B. Johnson Law Enforcement Training Center in LaPlace. After the ceremony, officers and family members of the fallen finest joined Sheriff Mike Tregre for a balloon release.

“In the words of Edmond Burke, ‘evil prevails when good men do nothing,’” Tregre said. “So we come together for yet another year to respect, honor, remember those who have paid the ultimate price serving St. John Parish.”

Tregre held back tears behind the podium as he said, “There are no fancy words or rhymes or quotes that can speak more of what our brothers have done for us.”

Tregre added that he is doing all he can to ensure deputies have all the training and resources needed to do their jobs successfully. A fallen officers memorial is being planned for the Lloyd B. Johnson Training Center, and he hopes it will be a place where family, friends and supporters of law enforcement can reflect on the ultimate sacrifice St. John Parish officers have made.

“Every day, we as citizens ask a great deal of the men and women in law enforcement,” Tregre said. “Every day, they choose to pin on a badge and go to work, not knowing what the day will bring, and praying that they come home safely at the end of the shift. Last year, as the COVID-19 pandemic wreaked havoc all over the country, our deputies still came to work, putting themselves at risk against an invisible killer to do the job that few want to do and even fewer are able to do.”

The following fallen officers were honored during the ceremony: