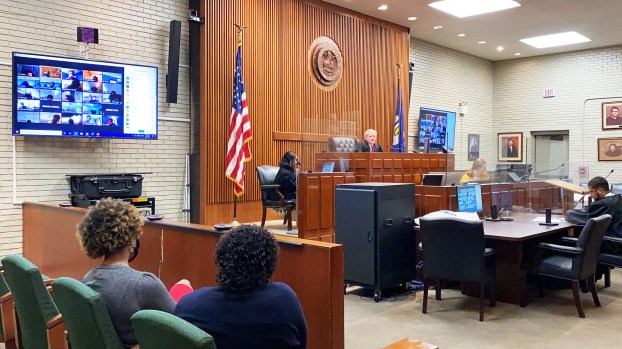 Middle school students participated via Zoom instead of visiting the Edgard Courthouse, but the educational session still provided a wonderful opportunity for the youth to meet the judges of the 40th Judicial District Court and learn about how the law impacts their everyday lives.

This year’s theme was “How to deal with ‘haters’: Cyberbullying no more!”

Sgt. Danielle Falgoust, a DARE instructor with the St. John the Baptist Parish Sheriff’s Office, shared the true story of a 14-year-old eighth grader who took his own life after enduring three years of relentless bullying.

Curtis Taylor was an honor roll student who volunteered to help disabled children at his school. Every dream for his future was stolen away as other boys at school slammed his head into lockers, tripped him in the hallways, vandalized his property and poured chocolate milk on his favorite sweater.

Curtis Taylor’s 5-year-old brother found him after he took his life on March 22, 1993. Falgoust explained to the children listening in on Law Day that bullying has only gotten worse with the development of technology over the past 20 years.

“You don’t know what someone else is going through at home. They may be struggling with things in their personal life. Don’t bully them at school; it may be their safe zone,” Falgoust said. “We need to fight together to end this bullying, because it’s just getting worse and worse, especially now that technology is here. Ninety-nine percent of teens now have cell phones, and that’s where most of our bullying is occurring.”

Falgoust encouraged students to report bullying to a trusted adult using the five ‘W’s: who, what, when, where and why.

Division B Judge Nghana Lewis told the students that every state in the United States has an anti-bullying law. Louisiana’s law states that a person age 18 or older charged with cyberbullying could face up to a $500 fine, up to six months in jail, or both. An individual under the age of 18 charged with cyberbullying can be called into court by way of a complaint being filed, and the Department of Families in Need of Services would be brought in to address the issue.

“There are legal consequences that surround this concept of cyberbullying,” Lewis said. “Bullying negatively impacts all youth who are involved- those who are bullied, those who bully others and those who witness bullying. You can be on the receiving end and also be a bully, and not even be cognizant of it.”

Lewis shared her experiences with bullying during a time when she was both a victim and an aggressor. In seventh grade, she and some other kids from school brought a feud to the weekend church fair. Back-and-forth chatter escalated the situation throughout the weekend until scissors were brought out. Lewis said her heart still beats fast when she remembers being held to the ground as her hair was cut.

Upon further reflection, she realized she wasn’t totally innocent in the situation.

“It doesn’t at all excuse what happened to me because no one deserves to be a victim, but you also have to be cognizant and aware of your actions and your conduct,” Lewis said.

Her advice to students was to follow the GRACE model, which stands for setting Goals, Respecting ourselves and others, Accountability, Choices and Energy.

She challenged students to think about their future career goals and whether they can be hindered by the content they are putting online now. According to Lewis, students should consider how they want to dedicate their energy, effort and time before posting or sharing something they might regret.

Division C Judge Sterling Snowdy and Division A Judge Vercell Fiffie spoke about how the law brings order to every aspect of life. Snowdy said Law Day was first introduced by former President Dwight D. Eisenhower in 1958. Congress followed suit by establishing May 1 as Law Day in 1961.

LAPLACE — Licensed addiction counselor Freda Fulton has helped individuals overcome their vices for the past 13 years, but she’s... read more