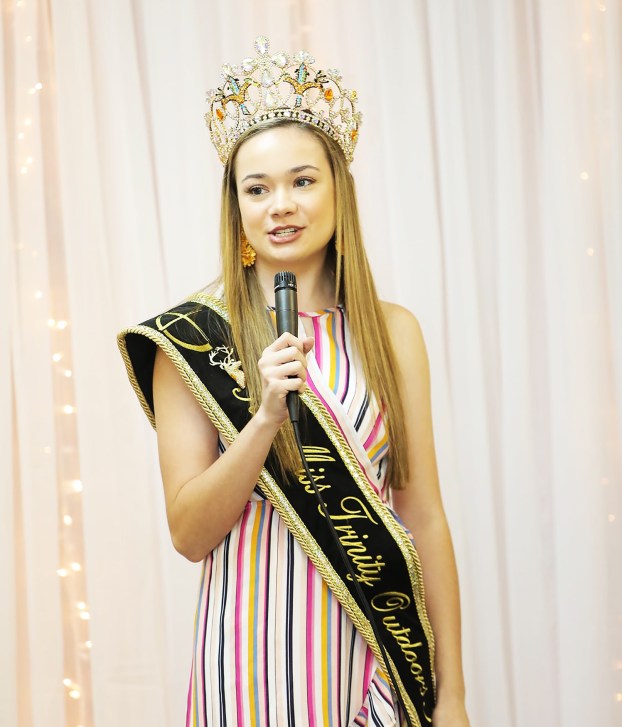 LUTCHER — Faith Madere is no stranger to the stage. At 16 years old, this Lutcher High School junior is in her 14th year of dance and has held four pageant titles within the past four years.

Whether she’s volunteering with the Down Syndrome Association of Greater New Orleans or practicing competition choreography with Yvonne’s Directions in Dance, Faith shines when she is being herself. She’s genuine and respectful, and her self-motivation fuels her to chase her dreams.

As a pageant queen, Faith also relishes every opportunity to attend queen events and learn about the different festivals and industries across the state of Louisiana.

Being a pageant queen also means being an ambassador, and this was especially true when she became the Teen Miss Trinity Outdoors Queen in 2018. Trinity Outdoors Disabled Adventures is a nonprofit organization through which founder Jason Bland gives children and adults with disabilities an opportunity to experience the outdoors and build self-confidence on hunting and fishing trips.

Faith attended the Trinity Outdoors Bass Classic as well as banquets throughout the year to raise awareness for the organization.

Dance is another big part of Faith’s life, as she’s been a student at Yvonne’s Directions in Dance for as long as she can remember. Her 14-year journey at Yvonne’s included six years of competition dance, starting in second grade. She returned to the competition team this year after a few years of taking recreational classes.

When she wasn’t dancing competitively at Yvonne’s, Faith expanded her horizons by joining the Purple Jazz dance team in middle school. She spent two years on the varsity cheer team at Lutcher High School and helped her team clutch a first place regional championship for the first time in the school’s history.

However, she was ultimately drawn back to the world of dance.

Faith is now a member of the Lutcher High School dance team as well as a competitive dancer at Yvonne’s. At her most recent competition with Yvonne’s Directions in Dance, one of her dances won first place in the Next Star competition with the Star Dance Alliance in Baton Rouge. The team’s jazz number won the regional championship.

“I love it very much. It was one of the best decisions I ever made to go back, which just brought me back to when I was little. I’ve gotten even closer to the studio that has basically been my second home for my whole life,” she said.

Faith is ecstatic to have been selected to portray Alice in the 2021 Yvonne’s Directions in Dance ballet production of Alice in Wonderland. The show will stream live on the DanceBUG app at 6 p.m. Saturday, May 1, and it would mean a lot to Faith to have a virtual audience since capacity guidelines limit in person attendance.

Yvonne’s also opened Faith’s heart to a future career in teaching. She became an assistant teacher as soon as she was eligible in sixth grade and was recently promoted to student teacher. After high school, she hopes to become an official Yvonne’s staff member while majoring in education at Nicholls State University.

“I fell in love with being able to teach kids and watching them grow in doing something that I love to do. I’m beyond excited to be a teacher,” Faith said.

Faith is well on her way to a college education. Attending the Science and Math Academy in Vacherie has given her the opportunity to take dual enrollment classes and collect college credits while still in high school. Her GPA is above a 4.0, and she is on track to have her first year of college credits completed by the time she finishes 12th grade.

Faith’s academic success has earned her an invitation to Lutcher High School’s ACE Banquet for the past three years. She’s part of her school’s Beta Club and participated in several community service activities prior to the pandemic, including setting up for the Festival of the Bonfires and writing letters to residents of local nursing and veterans homes.

Faith also had the honor of being chosen as the Romaguera Photography Spokesmodel for the Class of 2022.

Faith’s mother, Jennifer Madere, said she is proud of all that her daughter has achieved.

“She’s everything I wasn’t,” Madere said. “I love her time management and her priorities. I love that she’s motivated and that I never have to ask her what she has to do. She is very independent.”