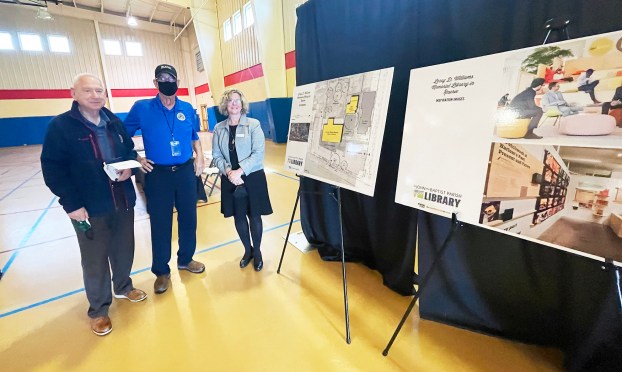 LAPLACE — The 21st Century library is not merely a repository for books, but a community center that reflects the culture, history and needs of the region, according to library planners Kathryn Taylor and Christopher Garris.

In Fall 2020, Taylor and Garris completed a feasibility study for the construction of a new Reserve Library on River Road. The St. John the Baptist Parish Library Board acquired land adjacent to St. John Theatre for the construction, which has an expected budget of $9 million to be funded through Library savings.

Three community engagement meetings were held in REGALA Gym from April 17-19 to get feedback on the project before it moves to the design phase.

Elected officials and community members who attended Monday’s session felt strongly that innovation must be balanced with cost and realistic expectations of which services would be utilized by the Reserve community.

Taylor and Garris have worked together for the past 15 years to plan library projects. They said the sky is the limit when it comes to brainstorming ideas for the Reserve Library, which could include outdoor programming in a community garden, a farmer’s market, a rooftop terrace with views of the Mississippi River, historical gallery exhibits, creative “maker spaces” and podcast booths to record oral histories.

Taylor said libraries are champions of the youth, a hub for local business partnerships and a home for all in the community. “Everyone of all ages should be able to come in and see themselves reflected,” she said.

Library leaders maintain that the current Reserve Library building at 170 W. 10th Street does not have enough parking space to adequately serve the community, as patrons sometimes have to park in nearby residential areas or on Lions Club property. Functionality of the library was also discussed. Tullos added that, prior to the pandemic, there were often waiting lists to use the meeting room at the Reserve branch.

St. John Parish Assessor Lucien Gauff came to the June 2020 Library Board meeting and presented nearby properties that were available. At that time, the Library Board voted to begin a feasibility study that culminated in the purchase of land in December 2020.

The new facility is expected to include 56 parking spaces. The new library will also incorporate the “1885 house” next to St. John Theatre, though the function of the historic house has not been determined at this stage.

No decisions have been made at this time regarding the relocation or demolition of other properties on the land. Tullos stated that representatives of the Godchaux-Reserve House Historical Society will have a seat on the design committee and a voice in the decision-making.

“(The current Reserve Library) is smaller than the one at East St. John, so this was long overdue,” Keller said.

Houston, Madere and community member Eugene Borne enjoyed the library planners’ presentation but cautioned against building a facility too large to maintain.

“I care about the cost. We have to explain this to the residents. The money is there, but it is still their money, so they have to feel comfortable with how much it’s going to cost to build a library in Reserve with a population of just over 9,000,” Houston said. “For something like this, you will need additional staff to man it; you will need additional utilities.”

Houston added that the community did not show overwhelming support the last time the library millage was up for renewal.

“If we build this and five, six years down the line, we can’t afford this, there’s a problem,” she said. “We’re excited that we’re going to get this library and that it’s going to tie into the historical trail to try to rejuvenate and revitalize the River Road. We just don’t want as much cost to the taxpayers.”

Borne was reminded of past presentations for construction projects that promised community growth but have since become under-utilized in St. John Parish.

“I’ve gone through many presentations like this that have taken place in the parish, one of which is the Civic Center on Highway 51 that we absolutely had to have, couldn’t live without it, or St. John the Baptist Parish was going to fall behind. This very building, REGALA, had a similar presentation on how it was going to move the residents who didn’t have access to gyms,” Borne said. “The presentation was really nice, but now we have to put it in a practical sense for the town we are actually in.”

Borne clarified that he is not against the library construction, though many residents he’s communicated with are opposed to the idea because they view libraries as repositories for books rather than community centers.

“We need to do a better job at educating the public on that,” Tullos responded.

Madere said there is no doubt that Reserve needs a new library with more space for patrons, but he doesn’t see a need for a multi-level facility with rooftop access.

“We have to make sure it’s feasible and it is going to be utilized in this area. You might have 10 different things that are new to libraries, but how many of the 10 are going to work in this area?” Madere said. “We have to build something that’s going to be used, not wasting any space, and is going to reflect the history of the parish, along with some new innovations. But we don’t have to spend $10 million or go three stories to accomplish that.”

An engineer in attendance said grants could be a great help in securing additional funding.

“We just want to sit back and use the parish’s money. There’s money out there other than that to be utilized. No one has a grant writer to do all these things,” he said.

A community survey on the building project is available at the following link: docs.google.com/forms/d/e/1FAIpQLSc-tp1E8L5H0CfHPoOk3fqib9riB5Ve2pQjBOx–Y73iqdNqA/viewform

LAPLACE — The St. John the Baptist Parish School Board voted Thursday night to relocate all Milesville employees and... read more