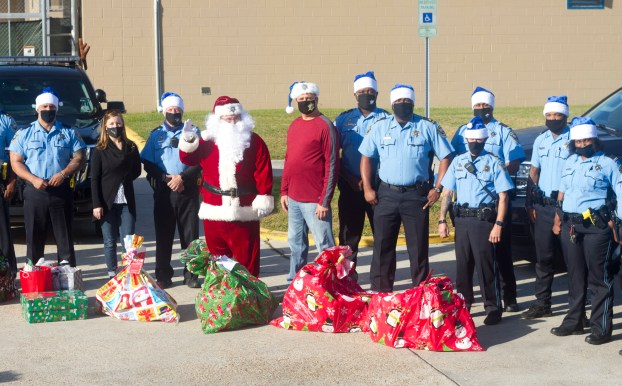 LAPLACE – Instead of flying through the night on a sleigh pulled by reindeer, Santa Claus traveled in a decked-out patrol car this week to deliver Christmas presents to River Parishes families in need.

This marks the 15th year GSmith has hosted a Christmas giveaway. Brothers Glen and Gary Smith have been fortunate to find success in their professional and personal lives, and they believe there is no better time than the holiday season to lend a helping hand to others in need.

The past two Christmas giveaways have involved distributing Walmart gift cards to families with an identified need, according to GSmith spokesperson Leigh Hallas. The initial plan was to return to a large-scale family fun celebration at the Shriner’s Hall in Destrehan as in previous years, but the advent of the COVID-19 pandemic called for a creative alternative.

“In the interest of health and safety, we didn’t want to put any of the families in a position where they were going to feel like they had to come to a gathering,” Hallas said. “We came up with the idea to ‘adopt’ some families in each of the three parishes. People have had such a tough year, some more than others. For folks who are already struggling, it’s got to be a lot to handle this year. We really wanted to focus on families that we knew were having a tough time, so we reached out to the sheriff’s offices and the BO$$HOG Brothers since they work directly with the community.”

Roughly 10 to 12 families were selected in each of the parishes with help from community partners, who also provided wish lists and clothing sizes for families in need. GSmith financed the Christmas shopping and came together with the partners for several days of wrapping and addressing the gifts.

Hallas was especially impressed with the BO$$HOG Brothers’ ability to get all their gifts wrapped, packed and ready to go within 45 minutes despite claiming that they could not wrap presents. The group of longtime friends has a mission to provide mentorship and community support throughout St. James Parish.

The St. Charles Parish Sheriff’s Office was thrilled at the prospect of delivering gifts. They brought out all the bells and whistles, quite literally. Patrol cars were decorated, sirens blared and bells rang as the officers pulled up outside the houses of the chosen families.

Parents were notified in advance to ensure families knew it was a joyous occasion and not an emergency. Most of the children, however, watched in wonder as the parade of patrol cars signaled their Christmas surprise.

It was a similar sight in St. John Parish this week as officers adorned their units with reindeer antlers and wore blue Santa hats to deliver Christmas joy to 11 families on the East and West banks.

“Practical but fun was what we were going for,” Hallas said. “We reached around 132 people in total.”

Deputy Ingrid Perrilloux of the St. John the Baptist Parish Sheriff’s Office said it was wonderful to see how happy the families were. She said nominations for families were obtained through the community center in Reserve.

“We even saw with some families that the mothers were crying because they had no other way to have Christmas for their kids,” Perrilloux said. “It did our hearts so good to make this happen for these families. It was so wonderful to see and experience.”

It was especially rewarding to make a difference in a year where families have struggled so much, according to Perrilloux. She added, “It’s been a big impact on the community with people being shut in so much, just to show them that people are out there who still care and are willing to make things special for them and for their family. The deputies are so excited to take part in these events, and it is amazing how quickly they volunteer.”

Local law enforcement agencies have been dedicated partners to GSmith’s community involvement, according to Hallas.

“They are so entrenched in their communities. They want to do well and want to take care of people. I can’t imagine what they go through when going to people’s homes seeing dangerous and sad conditions and feeling a little helpless about it,” she said. “This gives them a chance to give back to the community and show that they care. If we can help them with that and help the families, everybody wins.”

Principal returns to school after near death battle with COVID-19

RESERVE — At 66 years old, Riverside Academy Principal Michael Coburn had never been admitted to the hospital – not... read more