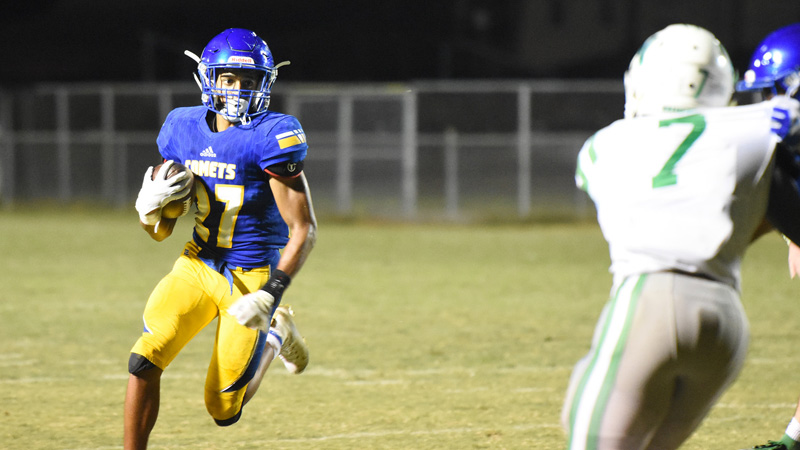 Keenan Gauff is a senior running back for St. Charles Catholic in LaPlace.

LAPLACE — St. Charles Catholic senior Keenan Gauff rides a bicycle alongside his grandfather every morning to stay in shape and prepare for a football season that remains shrouded in uncertainty.

COVID-19 has kept Keenan away from the gym and has brought major changes to football practice. Instead of tackling, the Comets are walking through plays and maintaining six feet of distance on the field. Statewide shutdowns killed spring football, which would have allowed Coach Frank Monica to gauge the talent of the incoming football team.

But one thing is certain: Keenan is a contender. The running back collected more than 800 yards rushing and received first team all district honors during his junior season. He was also named one of the top 50 football recruits in the New Orleans area.

The highlight of his junior year was collecting 212 rushing yards and three touchdowns during SCC’s 36-0 shutout over E.D. White.

This year, the bar is even higher. Keenan is competing against family legacy to achieve more rushing yards than his father, Carey Gauff Jr., who played football at St. Paul in Covington before advancing to a collegiate career at Arkansas-Monticello. 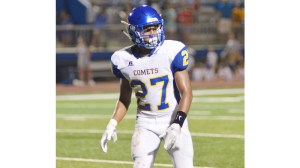 “We are in a competition to see who has a better senior season. He had a 1,000-yard season, and I’m trying to be better than him,” Keenan said.

Keenan has played football since he was a third grader at Ascension of Our Lord Catholic School in LaPlace. He loves interacting with his teammates and coaches, and he thinks the community support is what makes being a Comet so special.

“It’s the tradition, the community, the team spirit we have. We have big time support from parents and families with the Quarterback Club,” Keenan said.

“I owe a lot of thanks to my grandmother, Beverly Gauff, who gives me so much guidance and support with academics. I am also thankful to Coach Frank Monica for the work ethic that he instills in us. We practice and train very hard, and we play hard. I feel that I am being well prepared to play at the next level.”

Monica said Keenan is a “home run hitter,” meaning he is capable of scoring touchdowns from long distances. Monica also described Keenan as one of the most explosive members of the team.

“We’re counting on him an awful lot. He’s got experience, so he knows our system and he could probably play at multiple positions for us,” Monica said.

Athleticism seems to run in the family. Keenan is the cousin of teenage tennis prodigy Coco Gauff, who made national headlines last year with an upset win over Venus Williams at Wimbledon.

Coco received a key to the city during a visit to St. John the Baptist Parish in November 2019. While she was in town visiting family, Coco made a stop by the St. Charles Catholic stadium to watch Keenan and the Comets earn a 43-42 overtime playoff win against Catholic-New Iberia.

Family has always been significant in Keenan’s life. After his mother passed away from a car accident during his infancy, Keenan went to live with his grandparents, Carey and Beverly Gauff.

Carey Gauff is proud of the young man Keenan is growing up to be.

“He’s been a pleasure and something special in our lives. He’s never given us a minute of trouble,” Gauff said. “I had the coronavirus during the month of April, and my wife had pneumonia. The three of us were here together, and Keenan held everything together for us. That’s the kind of kid he is.”

Keenan has been an altar server at Our Lay of Grace Catholic Church since he was old enough to serve. He has done a lot of community service, including volunteer work with Second Harvest Food Bank.

Keenan was a member of the Belle Terre Piranha Swim Team for many years. He is also an active member of St. Charles Catholic’s Track and Field team, where he runs the 100-meter, 200-meter, and the 4×100 and 4×200-meter relays.

He was selected “Class Favorite” among the boys in his junior class. After graduating from SCC in 2021, Keenan hopes to continue his football career at the collegiate level while pursuing a career in exercise physiology.

He has received a scholarship offer from Louisiana College in Pineville.