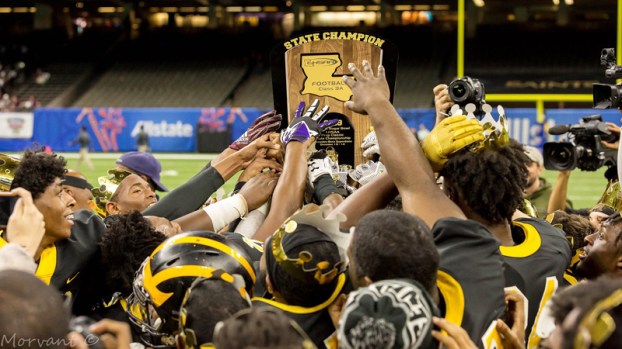 The St. James Wildcats won the state title for the first time in 40 years in December 2019. Photo Credit: Kerry Morvant

ST. JAMES — The St. James Wildcats clutched their first state title since 1979 when they won the 2019 LHSAA Class 3A Football Championship. In light of this accomplishment, the St. James High School Football team has been selected as the Allstate Sugar Bowl’s Greater New Orleans Boys’ Prep Team of the Year.

The Greater New Orleans Sports Awards Committee, sponsored by the Allstate Sugar Bowl, selects annual award winners in a variety of categories. It also selects Amateur Athletes of the Month and each year’s Hall of Fame class. Overall, 24 individuals and four teams will be honored for their 2019-20 achievements. Honorees are being announced over a period of 24 days, wrapping up with the Corbett Awards for the top male and female amateur athletes in the state on June 10 and 11.

St. James, under fourth-year coach Robert Valdez, registered a perfect 15-0 record and won the Allstate Sugar Bowl/LHSAA Class 3A state championship in dominating fashion with a 51-14 win over Jennings. None of the Wildcats’ five playoff victories came by fewer than 11 points and their average margin of victory in the post-season was 25.6 points. Shamar Smith, the Class 3A Offensive MVP, and Sai’Vion Jones, the 3A Defensive MVP, led the team. Smith, a senior quarterback, completed 140-of-245 passes for 2,012 yards and 17 touchdowns. As a runner, he had 207 carries for 1,267 yards and 27 TDs. Jones, a junior, finished with 102 tackles and 13 sacks.

“I’m extremely grateful and blessed,” Valdez said following the season. “This was a special season for us as a team. The players and the coaches came together and believed in what we did each week and did their very best.”

The other finalists for Greater New Orleans Boys’ Team of the Year were the Archbishop Rummel football team, the Brother Martin wrestling team and the St. Paul’s soccer team.

RESERVE — The Wildcat nation will commence summer workouts on June 8 with restrictions, according to Coach Brandon Brown. Brown... read more