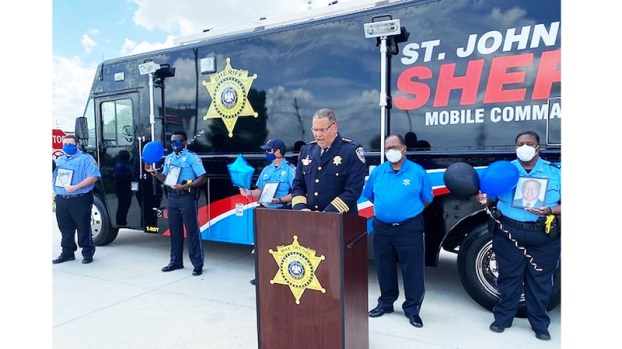 A limited number of representatives from the St. John the Baptist Parish Sheriff’s Office gathered to honor fallen officers this week. The public viewed the memorial ceremony via Facebook Live.

All give some and some give all: Fallen officers remembered in virtual ceremony

LAPLACE — This year’s Fallen Officer Memorial Ceremony moved forward without its usual crowd. With social distancing measures in place, the St. John the Baptist Parish Sheriff’s Office went live on social media to honor eight local law enforcement officers who have lost their lives in the line of duty.

The special occasion coincides with National Police Week, which was established in 1962 to recognize those who risk their lives for the safety and protection of others. In St. John Parish, it is a time of remembrance and reflection of justice.

This year, the families of fallen officers Brandon Nielsen and Jeremy Triche got a taste of long-awaited justice when gunman Kyle Joekel was found guilty of first-degree murder and sentenced to death on Feb. 9.

The vicious attack occurred on Aug. 16, 2012, making Triche and Nielsen the most recent fatalities among the fallen officers. Their photos were framed and held by SJSO officers during the ceremony, which included a moment of silence for each life lost.

Of the eight fallen officers in St. John the Baptist Parish, six were killed by gunfire, one was struck by a train, and one was killed by a drunk driver.

Sheriff Mike Tregre urged those watching to say a prayer for those who still put their lives on the line today for the safety and protection of others.

“It is the courage and spirit of our fallen officers that allows us to carry on. It is that spirit that brought us together today, and it is that same spirit that will unite us every year.”

In honor of National Police Week, U.S. Attorney Peter Strasser said, “We must never forget that the line of duty is endowed upon sacrifice, selflessness and courage. The role of law enforcement has not changed — guardian one moment and warrior the next. There are no fancy words, no rhymes or quotes, that can put more meaning into what our brothers in blue have done for us.”

Constable Ignace Rousselle was shot and killed in the line of duty on Oct. 20, 1936. He was 63 years old. Rousselle was gunned down when he went to a home to question a man about stolen farm equipment. The suspect was convicted of Rousselle’s murder and sentenced to death. However, the Louisiana Supreme Court later overturned the sentence. Rousselle was survived by his wife and seven children.

Deputy Sheriff Harry Anthony Troxlair, Sr. was killed on Aug. 1, 1969, when his patrol car was struck by an Illinois Central railroad passenger train. Troxclair was responding to a domestic disturbance at the time of the crash. Age 46 at the time of his death, Troxclair was survived by his wife and three children. He had served as an officer for 18 years.

Detective Lieutenant Sherman Ray Walker was shot and killed in an ambush-style attack in front of his home on Nov. 6, 1984. As he entered an unmarked patrol car, three suspects armed with shotguns barraged him with gunfire. Walker had served with the St. John Sheriff’s Office for eight years. At 32 years old, he was survived by his wife and three children.

Deputy Sheriff Barton Joseph Granier was shot and killed by a robbery suspect during a 2 a.m. struggle on Jan. 27, 1996. He was 37 years old and had served with the St. John Sheriff’s Office for five years. His survivors included his wife, daughter and son.

The suspect who shot Granier was shot and killed by other responding deputies during the incident. He had recently been released from prison due to overcrowding.

Code Enforcement Officer Edmond J. Songy Jr. was struck and killed by a drunk driver on July 9, 2002 while directing traffic at an accident on I-10 near Exit 206. Songy was in uniform and wearing a reflective vest. He was 60 years old and had served with the St. John Sheriff’s Office for six years. Songy was survived by his wife, one son and two grandchildren. The drunk driver pleaded guilty and was charged with manslaughter. According to court reports, he paid a $200 fine, just over $100 in court costs, and received six months of inactive probation.

Captain Octavio Rafael Gonzalez was shot and killed on June 16, 2006 during a manhunt for two suspects who had shot and injured another officer minutes earlier. He was ambushed by a male subject and shot three times. In 2008, the gunman was convicted of first-degree murder and sentenced to life in prison without parole, in addition to 50 years for the attempted murder of another deputy.

Gonzalez had served with the St. John Sheriff’s Office for 13 years. At 40 years old, he was survived by his wife and two sons.

Deputy Jeremy Michael Triche and Deputy Brandon Joseph Nielsen were killed by gunfire on Aug. 16, 2012 during an ambush attack by a domestic terrorist group known as the Sovereign Citizens. Triche was 27, and Nielsen was 34. The case finally went to trial earlier this year, resulting in the conviction of gunman Kyle Joekel. The other alleged gunman, Brian Smith, was found unable to stand trial at this time due to a mental health diagnosis.

DPE donates masks, money to assist in the fight against COVID-19

RESERVE — In hard times, the community of St. John the Baptist Parish must work together to recover. Longtime partnerships... read more