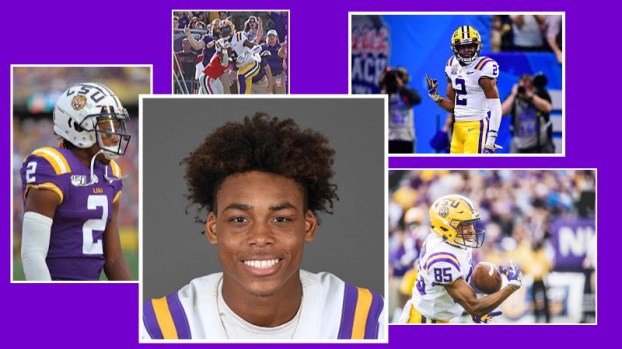 Justin Jefferson will be sporting a new purple and gold uniform next year.

ST. ROSE — While there was no surprise about who would be the first pick in the 2020 NFL Draft (LSU quarterback Joe Burrow) or which team would pick him (Cincinnati), fans throughout the area held their breath to see who would pick Burrow’s favorite target last season, Justin Jefferson. The St. Rose native and 2017 Destrehan graduate had to wait a few hours longer to learn his fate, but ultimately was selected with the 22nd pick of the first round by the Minnesota Vikings.

Jefferson celebrated in his St. Rose home with his parents, John and Elaine, and his brothers, former LSU quarterback, Jordan, and former LSU defensive back, Rickey. He then was asked on camera about his notorious on-the-field dance moves.

“I’m definitely going to search for more dance moves to do in the end zone,” he said.

Asked how he would describe his journey to the NFL, he replied, “It’s a blessing. I only can thank God for putting me in the situation and I really am blessed to be in the situation, just to be drafted in the first round to Minnesota. It’s a dream come true. I’ve been dreaming about it since I was a little kid. Finally being in this situation and going through this process it’s amazing and it’s a gift from God.”

In a later video-chat interview posted by the Vikings on Twitter, Jefferson told reporters the night was “heart-pounding” because “you never know what pick you’re going to go.”

“Just realizing that I’m finally becoming a professional athlete and I’m playing for an NFL team, I’m definitely excited and ready to join the team,” he said.

Jefferson was one of five players from LSU’s National Championship team drafted in Thursday night’s first round, a new school record. Besides Burrow and Jefferson, linebacker K’Lavon Chaisson was drafted 20th overall by the Jacksonville Jaguars, linebacker Patrick Queen was drafted 28th overall by the Baltimore Ravens and running back Clyde Edwards-Hillaire was the 32nd and final first round pick, selected by the Kansas City Chiefs.