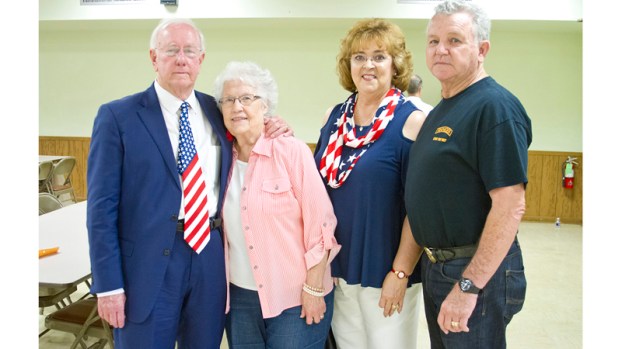 Harold Keller, from left, stands with his wife Jeanne at the 20th annual Get High on Life Memorial Day Prayer Breakfast. They are pictured with Donna and Danny Terrio.

Get High on Life achieves 40 years

LAPLACE — Harold Keller always wanted to be successful, long before he knew the meaning of the word.

Now nearing 86 years old, Keller feels at peace. He’s found success from living God’s will for his life — and changing countless lives in the process. For the past 40 years, his ministry “Get High on Life” has offered education, counseling and guidance to people battling alcohol and drug abuse.

Get High on Life was established in 1980 for the purpose of helping the people of the River Parishes and beyond by providing a forum where drug-related problems can be addressed and resolved in a caring and responsible atmosphere. Keller meets people who reflect the struggles he felt before becoming sober at 39 years old.

In the 1970s, Keller was faced with a choice of losing his family or giving up drinking for good. He chose the latter, but it wasn’t an easy road. For six and a half years after starting a 12-step alcoholic recovery program on Jan. 24, 1974, he was miserable.

The final step of his recovery program was to have a spiritual awakening that would inspire him to carry the message to others battling alcohol dependency. That moment finally came on the second Sunday of October 1980, when Keller was invited to speak at a church about the dangers of drugs and alcohol in the community.

Keller had been a regular church-goer for all his life, but he realized at that moment that he didn’t truly know Jesus. When he walked up to the altar, he knew he was changed.

When he got home, his wife Jeanne asked how the speech went. He told her it wasn’t any good; he was trying too hard to impress others, but it wasn’t all for naught. Because of that visit, he was born again.

In 1980, Get High on Life was formed. Keller connected with judges, district attorneys and counselors in the area to share his testimony with the public. He advertised, at one point giving away 2,000 bumper stickers that soon became widespread in St. John the Baptist Parish.

Whenever he got a call, he would go, and he never charged a penny for his services.

“People started calling me to speak,” Keller said. “I started doing some employee assistance programs with sheriff’s offices and started going into the schools. Ms. Beverly Harris, who was at East St. John, wanted to start a program for kids that could have a drug problem. That led to me starting groups at Destrehan, Hahnville, Lutcher, even in St. Bernard and Lafourche. We called them SWAC groups- Students Who are Concerned.”

Keller also started doing family interventions. He learned the secret was to have all parties agree to be honest and not hold anything against anybody.

For nearly 20 years, Keller and his wife visited the Fontainebleau Treatment Center every Saturday night. They only missed six Saturdays in those two decades, and that was only because the treatment center was closed in the weeks that followed Hurricane Katrina.

“My children would never plan anything on Saturday night,” Keller said. “Our 50th anniversary fell on a Saturday, and we celebrated it at Fontainebleau Treatment Center. The clients had a red carpet and they sang. It was really something.”

About a month ago, a former client of the treatment center reached out to Keller years after hearing him speak.

“I’m celebrating 10 years of sobriety,” the man told him. “I married a woman with three kids, and we are all doing well.”

It’s one of many success stories Keller has seen over the years.

“Jeanne, I guarantee it’s going to be good,” he told her in response.

After just nine minutes of speaking on how giving is the secret to living, Keller saw a young man follow him to the door. The young man’s eyes filled with tears, and he explained that his wife had left him and taken their children with her. He carried the burden in his heart because he knew his addiction caused his family great strife.

Keller gave him a book to read and prayed for the safety of his wife and children. Later, Keller would learn that young man had a gun under his pillow, and he would have committed suicide that very night if not for that nine-minute presentation and Keller’s words of kindness.

“I get as many calls now as I ever did,” Keller said. “I try to make just as many interventions. I don’t think I’ve ever turned down one. The problem is worse now than it’s ever been in my lifetime.”

Keller has also seen his fair share of miracles.

“I will be 86 years old in September. I never knew I could be this happy and at peace with myself as I am now. I know I’m doing what God wants me to do,” Keller said.

LAPLACE — A bill recently passed into law gives people in St. John the Baptist Parish and across Louisiana a... read more