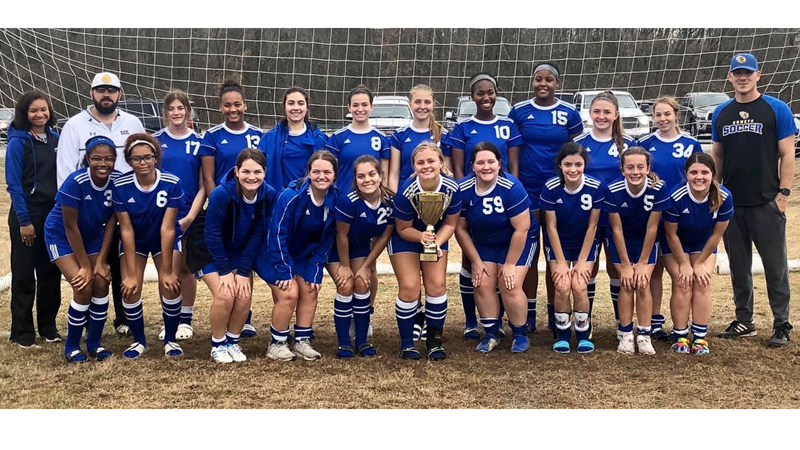 The Lady Comets competed in the Holiday Cup in Baton Rouge, where they earned first place overall with three wins.

LAPLACE – Before the 2019-20 soccer season, longtime St. Charles Catholic coaches Michael Rollo and Travis Trepagnier took pause to ask themselves if they wanted to keep leading the Lady Comets into battle. Together, Rollo and Trepagnier have led their teams to great success, even reaching the Division IV semifinals in 2017. Was it time to walk away?

“Coming into the season, me and Coach Travis didn’t even think we would be coaches,” Rollo said. “Then we decided to give it one more year.”

Now he’s pretty glad he did.

The Lady Comets were 9-2-1 after Monday night’s 8-0 victory against Chapelle, the final match before beginning district play on Friday against Covenant Christian. Of course, the “big” game as far as River Parishes fans are concerned is the match against Riverside Academy on Jan. 16. But the district title probably will be on the line when the Lady Comets travel to Houma Christian on Jan. 23.

This season has already been fun, however.

After losing the season-opener to Lutcher, 1-0, the Lady Comets went on a pretty amazing streak of nine games without a loss. That did include a tie with Country Day.

“I’m very happy with the way we’ve been playing,” Rollo said. “The biggest improvement from last year is the way we possess the ball.

Rollo said he and Trepagnier did lose a lot of seniors from last year’s squad, but had a solid core with some experience returning. They weren’t exactly sure how that would play out on the field, though.

The key so far has been the play of four seniors on the back line of defense. Colette Rainey, Kirstin Smith and Valerie Perilloux, along with goalkeeper Taylor Abair, have been the defensive stalwarts the Comets have needed.

“That’s the core of our team,” Rollo said. ‘That’s the strength of our team. (They bring) experience, for one thing. They’ve all been here. Colette and Kirstin have been starting since the day they stepped foot on campus as freshmen and Valerie, it’s her third year. They’ve seen in all. They played in the semifinals. And, as you can see from those scores, we don’t allow many goals.”

That’s partly thanks to Abair, a second-year starter, who has “improved greatly,” according to Rollo.

But another key to the Comets success was a pair of younger players, Mia Ganote and Katherine Bergeron, who came in and filled some key spots.

Of course, a soccer team can’t win without goals. Antoinette Giarella is the team’s leading scorer.

“She’s our Taysom Hill,” he said. “She can play anywhere.”