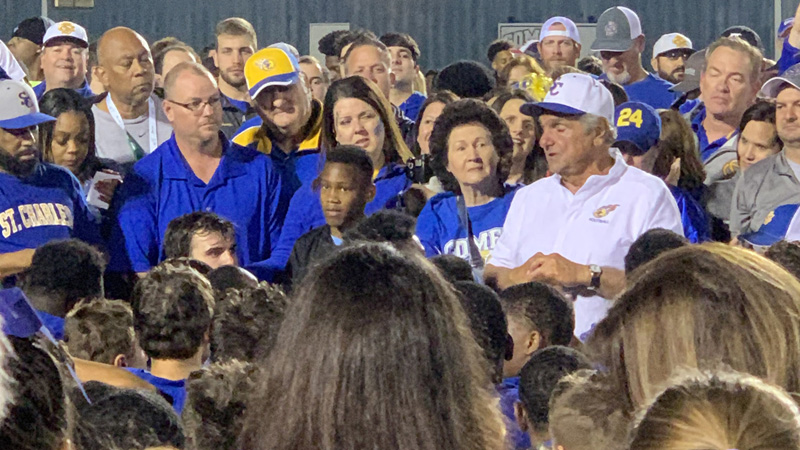 At 71 years of age, he is coaching his 50th season, his 19th at St. Charles Catholic. This year he became the winningest coach in the River Parishes with 267 wins, then went on to win 10 more. Frank’s Comets are 11-1.

Nick Monica is just 39 years old. After spending 15 years as an assistant football coach at Archbishop Rummel High School in Metairie, and nine years as the head baseball coach, Nick was picked to be the head coach of the Raiders last January. Nick’s Raiders are 12-0.

But, in truth, the apple didn’t fall very far from the old tree.

Both coaches – both Monicas – have their football teams playing for state championships this weekend.

Frank’s St. Charles Comets, the No. 3 seed, will play No. 1 seed Lafayette Christian at 6 p.m. Saturday at Cajun Field on the campus of Louisiana Lafayette for the Division III Select Schools state championship.

Nick’s Rummel Raiders, the No. 1 seed, will play No. 2 Catholic High of Baton Rouge at 7 p.m. Friday at Yulman Stadium on the campus of Tulane University for the Division 1 Select Schools state championship.

Never before has Louisiana had a father-son combination coach for a state championship in the same year.

Nick, a graduate of St. Charles Catholic, who went on to play baseball at the Nicholls State and the University of New Orleans, said he wasn’t sure he wanted to be the head coach of the Raiders when it was offered to him. His dad, he said, had even more doubts.

Coaching somehow became the Monica family business, though. Frank’s other son, Ty, is the head softball coach at St. Charles and his nephew, Wayne Stein, is one of Frank’s assistants. Frank said he didn’t really dream of being a legendary head football coach either. He really wanted to be a professional baseball player.

“I was too short to be a baseball player, so I went into coaching,” he said. “I never thought about championships or anything like that. You don’t do it for the wins and losses.”

But championships are nice.

Frank has won football titles at Lutcher, Riverside Academy and St. Charles, the last in 2011. He also coached at Tulane University and Jesuit High School.

Nick is on the verge of winning his first championship, the Raiders’ third.

“I’m very proud of him,” Frank said. “But I told him, he might have won too early. He set the bar high.”

While the Monica extended family is happy that the games will be played on separate days so everyone can attend, Frank said the hardest thing to do is watch his son’s team as a fan.