‘One Night in Miami’ filming in LaPlace 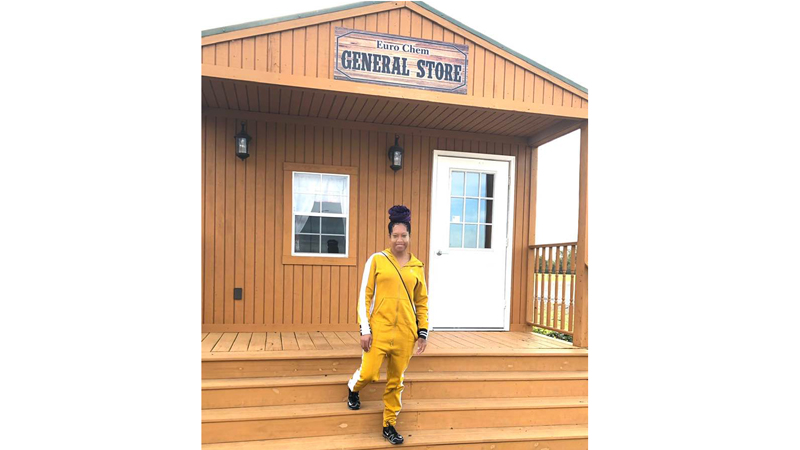 Actress Regina King stands on the steps of the General Store behind the St. John Civic Center soundstage in LaPlace.

LAPLACE — Award-winning actress Regina King is making her feature film directorial debut in the St. John the Baptist Parish Civic Center this winter. The soundstage on Highway 51 in LaPlace will house the highly anticipated production of “One Night in Miami.”

Based on the play by Kemp Powers, “One Night in Miami” follows Cassius Clay Jr. (later to become known as Muhammad Ali) on the night of Feb. 25, 1964. Clay had just emerged as the World Heavyweight Boxing Champion following his shocking defeat of heavyweight boxer Sonny Liston.

As crowds swarmed Miami to celebrate the match, 1960s Jim Crow laws led Clay to spend the night at the Hampton House Motel with activist Malcolm X, singer Sam Cooke and football star Jim Brown. The film explores the late night hours that caused the men to emerge the next morning re-energized and eager to define a changed world.

Regina King rose to prominence in 1985 after appearing in the NBC series “227.” She would go on to appear in several television and film productions, including “Friday,” “Jerry Maguire,” “Southland” and many others. She has recently won awards for the ABC anthology series “American Crime,” Netflix series “Seven Seconds” and the film “If Beale Street Could Talk.”

Time Magazine named King one of the 100 most influential people in the world this year.

The production company heading “One Night in Miami” reached out to the River Parishes Tourist Commission over the summer, according to Executive Director Buddy Boe.

Occupancy of the Civic Center was scheduled for Nov. 1 through Feb. 6 to not disrupt the Andouille Festival or Mardi Gras balls. Filming is expected to take place predominantly on indoor sets to be constructed inside of the Civic Center.

Trailers and equipment may arrive as early as this week, according to Boe.

“They are expected to start filming in late December and have a production schedule that runs through January,” Boe said. “They will wind down towards the end of January so they can vacate the building for the carnival balls for Krewe of Dagé, Krewe of M.A.C. and Krewe du Monde. It’s definitely a revenue generator for the building.”

It’s also a revenue generator for the parish, according to Boe, who said the Tourist Commission is connecting production crews to local hotels and office space.

“We’re very excited, and we look forward to providing any assistance we can,” Boe said. “Obviously, we’re going to push as much as we can for local vendor usage regarding the production and all needs that they may have.”

Parish President Natalie Robottom is happy to see the impact films can bring.

“Anytime you have an award-winning actress like Regina King in your parish, it is a big win for everyone involved,” Robottom said. “Ms. King, the recipient of the 2019 Academy Award for Best Supporting Actress for her role in ‘If Beale Street Could Talk,’ has starred in a variety of productions on the big screen and on television.”

Robottom described King as an African American beauty who is smart and talented, allowing her to be selective in roles.

“It was an honor to welcome Regina King and her team to St. John the Baptist Parish and I look forward to having them in and around our parish over the next several months,” Robottom said.

For the River Parishes Tourist Commission, “One Night in Miami” is part of a larger narrative to attract more film industry opportunities to the region. Boe said 2019 has been a busy year for the Civic Center, and 2020 is shaping up to be the same.

However, the full economic impact of the film industry has not been quantified because many of the filming sites that have been utilized, including some plantations, have not required permits.

“We’ve been pushing over a year for a Regional Film Commission so we have a full list on permits, return on investment and economic development,” Boe said. “We would like to form the Regional Film Commission that could be the voice of the River Parishes to that industry, which is going to continue to grow as Netflix, Hulu, Disney and Amazon continue to make their own productions outside of the main film offices.”

In addition to offering a variety of scenery within the New Orleans Union, St. John Parish offers an extra lucrative incentive for production companies.