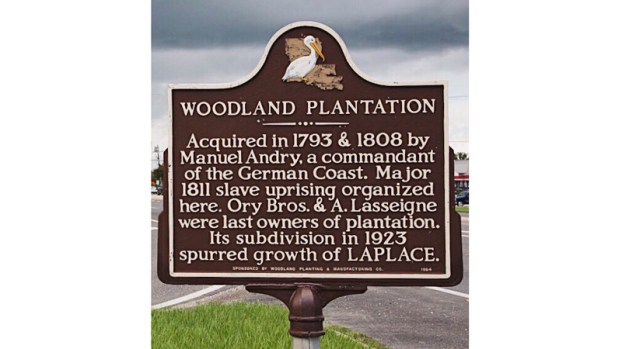 LAPLACE — On Nov. 8-9, hundreds of volunteers dressed in Antebellum-style clothing will march 26 miles from LaPlace toward New Orleans in an artistic reimagining of the 1811 Slave Revolt, an important facet of history that has been largely suppressed in textbooks.

The slave revolt re-enactment is an “art and social history project about freedom,” according to organizers.

It will be startling to see a procession of flying flags, horses, muskets and African drumming against a modern day backdrop of neighborhoods and refineries, opening a space for onlookers to think about the fight for freedom in the River Parishes.

Several St. John the Baptist Parish churches are educating the public on the history prior to the re-enactment.

A Freedom and Fall Celebration will begin at 11:30 a.m. Sunday at 450 W. Second St. in LaPlace (the Milesville community). The afternoon will mark the Inaugural Day of 1811 Slave Uprising Remembrance with free food and fun. It will feature a kid’s zone.

Meanwhile, adults will learn about the 1811 slave uprising — including how it relates to St. John Parish history, its impact on the local tourism industry and how to reclaim the narrative.

Sorapuru said Dr. Seck has researched the topic extensively and has a lot to share with the community.

“This will be an opportunity to share the history of what was found in the research and make people aware of the historical information that we have here in parish,” Sorapuru said. “For the people who live in this community, it’s important that they know the value of the history that’s here and the number of hardships that the past generations went through when slavery was a dominant force in Louisiana.”

Sorapuru added that visitors from around the world fuel plantation tourism, but not everyone hears the full story of slavery in the River Parishes.

“It’s an opportunity to educate not only the people in St. John Parish, but the whole world,” Sorapuru said.

The 1811 uprising was the largest slave revolt in the history of the U.S. South, and its roots trace back to Woodland Quarters in LaPlace, near the present site of Rising Star Baptist Church.

Through his research, Seck has been in communication with several local pastors, including Pastor Donald August of Rising Star and Pastor Freddie Howard of Mt. Calvary Missionary Baptist Church. Howard offered the church grounds to host Sunday’s Freedom and Fall Celebration.

Both pastors will provide reflections at Sunday’s event.

According to organizers, there was limited fighting during the 1811 rebellion, and much of the re-enactment will be a procession.

There was bloodshed in the historic event, however. Two white men were killed during the rebellion. After the militia was brought in, the uprising ended with dozens of slaves executed or beheaded, their heads planted on poles along the river.

While the topics surrounding 1811 are dark, organizer Yish Edwards said the Freedom and Fall Celebration is a family friendly event offering a separate set of activities for children.

“The event is geared toward churches in the community,” Edwards said. “We’re going to have a story time where we’ll have the kids sit down, and I’ll give them a kid’s friendly story about the event. Then we’ll have sno-cones, nachos and popcorn machines.”

There will also be a meeting about 1811 re-enactment participation from 5:30 to 7 p.m. today, Oct. 2, at Historic Riverlands Church in Reserve.

LAPLACE — Law enforcement and first responders are there at a moment’s notice to protect and serve civilians in distress,... read more