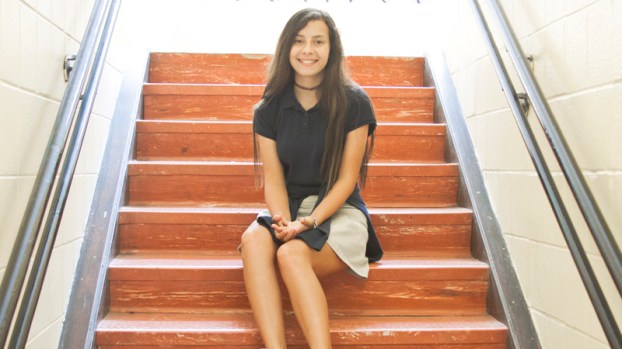 LAPLACE — Sophie St. Pierre of Garyville can see herself becoming a criminal profiler in the future, using her skills to analyze evidence, study human behaviors and identify likely suspects.

“It’s like a mystery on every single investigation,” Sophie said. “I love watching movies about stuff like that.”

Alternatively, Sophie can picture herself as a pharmacist, a career she would enjoy because of her love for science experiments.

The sky is the limit for Sophie. Currently an eighth grader at John L. Ory Communication Arts Magnet, she has the ambition to succeed in whatever she chooses in life.

Every school year, Sophie sets a goal to make honor roll. She always follows through, continuing in the footsteps of older sisters Lauren Eilts, Lindie Robinson and Lexi St. Pierre.

Lexi is in high school and her two oldest sisters are out of school and married, but that doesn’t hinder their strong sibling bond.

“They are really smart, and I look up to them so much because I want to be like them,” Sophie said.

Sophie St. Pierre describes herself as “weird, crazy and thoughtful.”

“Sophie St. Pierre joined the Ory family as a fifth grade scholar,” Brown said. “She believes in herself and has a can-do attitude that will carry her far in life!”

In Student Council, Sophie organizes fundraising efforts to benefit her school and weighs in on decisions that impact other school clubs.

Student Safety Patrol is a new addition to the school, according to assistant principal Robert Schaff. The program, sponsored by AAA, is designed to teach young pedestrians the importance of road safety.

Some of Sophie’s responsibilities include helping younger children onto the bus and assisting car riders.

When the final bell of the day rings, Sophie heads to volleyball practice. She’s played the sport since fourth grade, and she enjoys staying active. One of her favorite hobbies outside of school is riding four-wheelers.

Other times, she’s content to relax with friends and family.

Sophie describes herself as “crazy, weird and thoughtful.”

Her classmate, Leah Carrillo, described her as a true friend who is incredibly smart and kind to others.