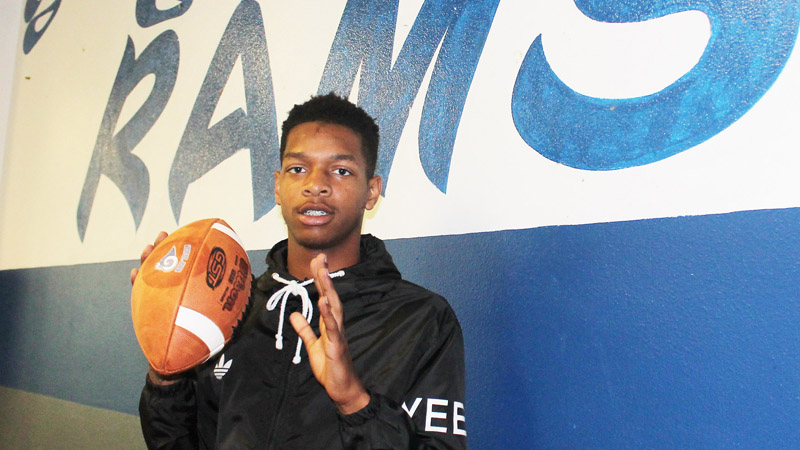 Gaudia, a three-year starter is a dual-threat player who can run and throw the ball.

EDGARD – Just about every story about West St. John High School senior D’Andre Gaudia describes him as a “dual-threat quarterback.” In the recruiting world, that’s a good thing.

But West St. John football coach Brandon Walters doesn’t want his QB 1 to be a dual anything.

He wants Gaudia, a three-year starter, to just throw the football.

“Truthfully, Gaudia is a dual-threat player who can run and throw the ball,” Walters said. “We ask him not to be. We ask him to be a pocket-passer. I tell him all the time, ‘Give the ball to the guys that actually run the ball. I just want you to make the decisions. Throw the ball and keep us going. But I don’t need you to be the running back.’”

“I feel like I have to run sometimes,” he said. “It just depends on if I think I can get a couple more yards. He always wants me to read before I take off and run with the ball.”

The problem is, Gaudia doesn’t always stop running when he should.

“He’s a baseball player,” Walters said. “He should know how to slide.”

The other problem is, Gaudia isn’t exactly built for running into the pile at 6-foot-1, 170 pounds.

“Some kids are kind of built for that,” Walters said. “He’s not one of those guys.”

Walters said, he should know – being an ex-defensive lineman and linebacker in his own playing days.

“You know, we tried to kill people,” he said. “Especially guys his size. I teach him from, what I know, what to expect. If you’re going to run the ball, eventually somebody’s going to take care of that. Somebody’s going to hit you. Some people don’t worry about 15-yard penalties. They take their shots on you. So he has to be aware of that.”

That’s when Walters likes to remind his senior how he first got to play in a game.

“He was here when Austin Alexander was here,” Walters said. “I like to remind him, ‘Remember how you started playing?’ He likes to run with the ball. Austin did the same thing and ended up with a concussion. It’s a great reminder.”

Gaudia has tempered his urge to run somewhat. He passed for more than 1,700 yards and 13 touchdowns last season and rushed for more than 200 and two scores to help the Rams reach the Class 1A semifinals. But they did not get to defend their 2017 title after the loss.

Then the 2019 season got off to a rough start as they lost to St. James, 28-8, in the annual Railroad Classic. Gaudia was pressured all night by the Wildcats’ defense, but managed to throw a 7-yard touchdown pass to Aaron Moll late in the game.

“Our first game didn’t go as planned,” Gaudia said. “We didn’t come out as strong as we thought we would. But we got past that week and we attacked the next week and it went differently.”

The Rams improved to 1-1 with a 34-21 over Riverdale on Saturday. Gaudia threw two touchdowns and a 2-point conversion, but he also had a pair of running backs who rushed for more than 100 yards each. Dakyri Jackson rushed for 162 yards and three touchdowns and Wantrell Williams rushed for 133 yards.

This week the Rams will travel to Lusher for a Thursday night game and Walters will continue to urge his quarterback not to run as much as he’d like to. The coach is so protective of his quarterback, he won’t even allow him to play defensive back.

“Oh no,” Walters said. “Our quarterback is just a quarterback. He begged me all last year to play DB and he probably could, but he’s much too valuable to do that. We have other kids that we ask to do that. If D’Andre has to go to DB, we’re in trouble.”