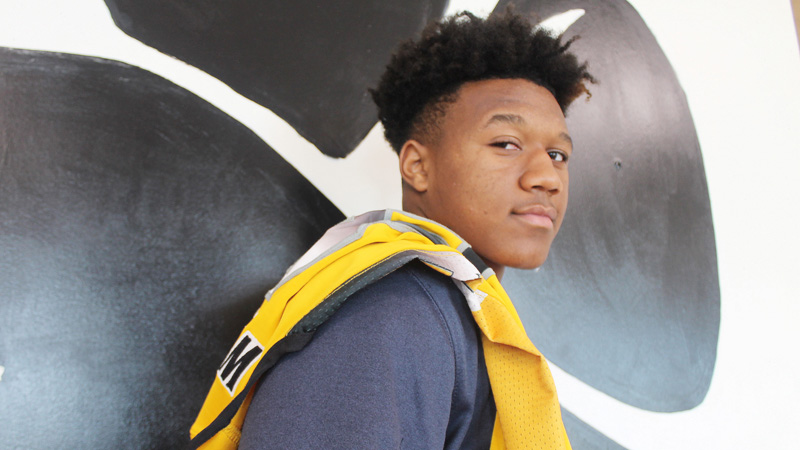 Now that he sees the bigger picture, Jackie Marshall makes commitment to academics and sports..

RESERVE – Thursday’s jamboree game between East St. John and West St. John high school may not have counted in the record books. It may have been just a glorified scrimmage, a dress rehearsal for the real thing, but don’t try telling East St. John’s Jackie Marshall that.

For the junior defensive end, it was the culmination of a lot of hard work and, he hopes, the start of a bright football future.

For Wildcats head coach Brandon Brown, it was the big payoff for a little bit of investment.

Brown had just taken over the head coaching spot at East St. John High when he spotted Marshall walking the halls. Marshall, at 6-foot-3, was easy to spot and Brown thought he would make an excellent addition to his team.

“I asked him, ‘Why aren’t you playing football, son?’” Brown said.

The answer was a common one – grades. Marshall had a tough time transitioning from a different school district and to high school and his grades suffered for it.

“I kind of played around when I was a freshman,” Marshall said. Social studies, in particular, gave him trouble.

Said Brown: “He was a typical high school freshman. He didn’t see the bigger picture.”

With a new school and a new team of his own to worry about, Brown could have told Marshall to take care of it, to come back when he had the required grades.

But Brown, after first ensuring that the young man wanted to play football (he did), made an investment. He got Marshall into an athletic P.E. class so he could be around the other players. He got him in the weight room. He got him into some online classes to help him catch up. And he got on him.

That commitment paid off last spring, when Marshall regained his eligibility. He was able to compete on the school’s track team as a shot putter and was able to play in the spring football game.

“It was good, finally getting to play,” Marshall said. “The school spirit was good.”

Marshall said the hardest thing was only being a part of the team. He could only do weights and conditioning. He couldn’t practice or play.

It also was a lot of work, he said.

“What they had me doing in the weight room,” he said. “It was a lot of things that were different.”

But the payoff came in the spring, when Marshall learned he was eligible and could take part in the spring game. And now, as he prepares for his first season as a Wildcat.

Brown added, there are already some college coaches looking at the 6-3, 230-pound junior who can run a 4.7 in the 40. That just makes him happier for Marshall.

“The easiest thing is to give up on a kid,” Brown said. “But that’s not my code. We were able to treat him as he could be, not as he was. At the time, he was just a big kid who was ineligible. Now, he could be the next big guy to come out of East St. John. He rose to the occasion. He did everything we asked of him.”