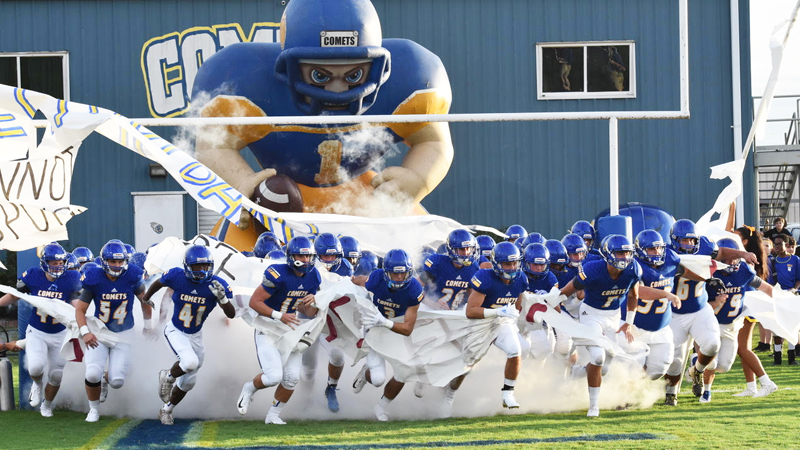 LAPLACE – As he enters his 49th year of high school coaching, St. Charles Catholic football coach Frank Monica has got his jokes ready for the 2019 season.

After his team put forth a nice effort in last week’s scrimmage against perennial Baton Rouge powerhouse University High (the Cubs scored three times and the Comets scored twice), Monica said he had some concerns.

“Our offensive line is like the border patrol,” Monica quipped. “They let everybody in.”

Monica blamed that on his team’s youth.

“We have some maturing to do up front,” he said. “I think the defense will be the strength of our football team and, hopefull, give our offense some time to catch up.”

At least he felt his team played U High a little closer than it had in recent seasons.

“I felt like we closed the gap a little bit,” he said. “We came out real, real sluggish in the first two series, on both sides of the ball. And then all of a sudden we realized for the first time that we were actually having full contact and they got used to the speed and the contact. I thought we played it better than we have in the past, but we’ve still got some cleaning up we’ve got to do.”

Even Monica must admit that the Comets’ glass is a little more half full than half empty this year. Although he lost some talent to graduation, including his top defensive players from last year, he returns five starters on both sides of the lineup.

Key among those is senior quarterback Justin Dumas (5-foot-11, 170) and senior running back Phillip Tran (5-7, 160), who was named All-District in 2018. Joining Tran in the backfield will be junior Keenan Gauff (5-9, 156) and junior Logan Forsythe at fullback.

The Comets defense appears to be solid with 2018 All-District  and Tulane commit Mason Narcisse (6-3, 287) anchoring the line at tackle.

The returning linebacker is All-District player Mandell Eugene, whom Monica called one of the best he’s ever coached in high school.

The secondary suffered a big loss in the graduation of Bryce Authement, who is now at Nicholls State, but Monica listed senior safeties Riley LeBlanc and Brady Jacob and corners Kameron Campbell, Justin Turcuit and freshman Kaden Foster as replacements.

They will be challenged by the Comets’ brutal schedule, though.

“We could have a better team and our record might not reflect it because of our brutal schedule,” he said. “There are no soft targets on our schedule.”

But the Comets do move back down to the Select School Division II bracket instead of the Division III bracket. That’s not to say that St. Charles didn’t handle itself in the higher division. The Comets were semifinalists both seasons in Division II. The Comets have played in seven state championship games.)