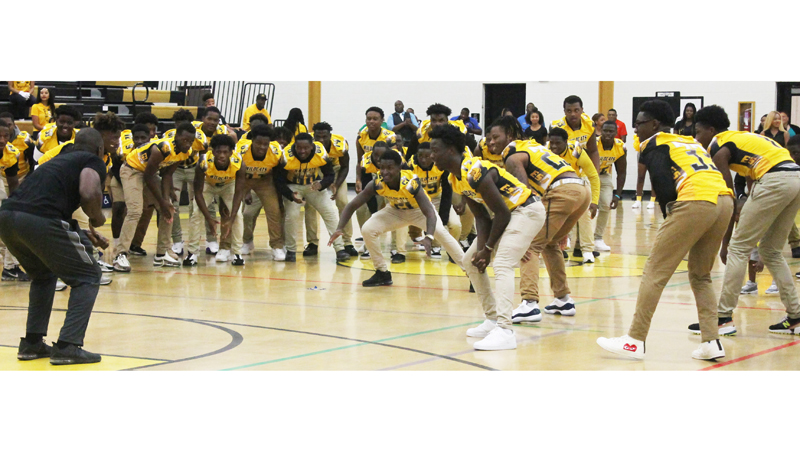 The East St. John Wildcats are led by Brandon Brown, who is in his second year as head coach at the school.

RESERVE – Since returning to his alma mater as head football coach last year, Brandon Brown has let everyone in St. John the Baptist Parish know that everything he does is “All about the E” – as in East St. John High School.

This year, Brown and his Wildcats have a new slogan with a few more letters in it: BUA. It stands for Back Up Airline, and it means the team is hoping that so many people come to watch them play at Joe Keller Stadium on Friday nights, it causes a major traffic jam in Reserve.

“We need everybody to come out and support out kids,” Brown said. “We need to get the community behind them.”

The Wildcats promise to reward that support with some good football on the field.

Brown seems to have turned around a team that has muddled in the middle of the District 7-5A pack in recent seasons. The Wildcats have finished 5-6 each of the last three years, losing in the first round of the playoffs in all three. The difference last year was that East St. John was oh-so-close to breaking through. The team lost four games by a total of eight points.

“That’s what we talk about,” Brown said. “The goal this year is to finish.”

The Wildcats lost a heartbreaker to McDonogh 35, 16-14, when the Roneagles returned a late punt for a touchdown. They lost to H.L. Bourgeois 7-6 in a game played in mud. And they probably should have beaten Destrehan but for a blocked extra point attempt.

Even Destrehan coach Steven Robicheaux said the ESJ Wildcats were “a different team.”

Then the Wildcats did what they hadn’t done since 2015 – beat Hahnville.

“That was a huge boost to us,” Brown said. “That’s what they talked about in my interview, how we were going to beat what they called the Big 3, Hahnville, Destrehan and Thibodaux. I think they were 0-12 against them the last four years. They’re tired of being the second tier.”

Now that he has a year behind him, things are a little easier for Brown. His schemes are set, the players are accustomed to his ways and discipline is in force.

Brown believes this year’s team has the potential to make even more noise on the football field. They showed that last week with an impressive scrimmage victory over nationally ranked Karr.

“I call it a glorified practice, but it shows you where we are,” Brown said. “I think it showed we could be a great team.”

The Wildcats return a slew of starters, including most of their skill people. Senior quarterback Sean Shelby and wide receiver Dontae Fleming lead the offense and Calvin Gardner moves from defense to running back. Up front, four of five linemen return as well.

“We’re going to be fierce,” said Sanders. “People are going to want to come out and support us.”