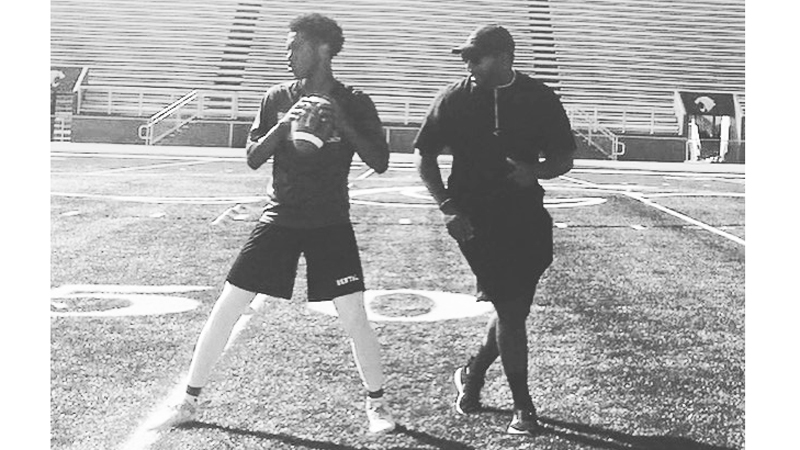 DESTREHAN – Heading into the 2019 football season, Destrehan coach Steven Robicheaux said he has a lot of question marks about his team.

Good thing he has at least one answer.

When folks ask Robicheaux what he’s going to do to replace prolific running back John Emery, who is now battling for a starting spot at LSU, the coach simply points to Kyle Edwards.

It will be up to the 6-foot, 210 pound senior not only to fill the hole left by Emery, but also to carry the offense for a while until first-year starting quarterback Damarius Jackson gets some much-needed experience.

Edwards knows he has some big shoes to fill. Emery, last year’s District 7-5A offensive MVP, rushed for more than 1,600 yards and 28 touchdowns to help lead the Wildcats to the Class 5A semifinals with a 12-2 overall record and 6-0 in district.

Edwards mostly was the backup, called upon to give Emery a rest. He finished with 708 yards and 8 touchdowns. That wasn’t always easy.

“You work your heart out during practice and then game-time comes and you get, like, two reps and then they take you out,” Edwards said. “Then they go one drive, two drive then put you back in for a few plays then out again. You’re pretty much just like a special team player. I would get kind of frustrated sometimes. I just wanted a chance.”

Edwards should get that chance this season – and then some.

The Wildcats also lost a pretty solid quarterback in JR Blood, who is now at Southern University. Moving into his spot is Jackson, who has little varsity experience.

“The question mark is at quarterback,” Robicheaux said. “Damarius (Jackson) had a great spring and a great summer but he needs experience. He’s a little different. He’s more of a running type quarterback but he throws the ball really well. It’s going to fall on Kyle to take that pressure off of Damarius early until he gets some experience.”

It helps that Jackson will have a big, solid, experienced offensive line protecting him up front. Kerwin Mitchell, Daniel Hart, Khyron Victor and Preston Madere are all seniors.

Eli Taffi is the lone junior.

He also will have an easy target in 6-3, 210 senior wide receiver Quincy Brown, one of the state’s top college prospects.

Robicheaux has even more question marks on his defensive depth chart. The Wildcats return only three starters on defense. Granted one of those is 6-3, 270 pound senior defensive lineman Noah Talianchich, a Tulane commitment.

The Wildcats also will be breaking in a new kicker in sophomore Will Bryant.