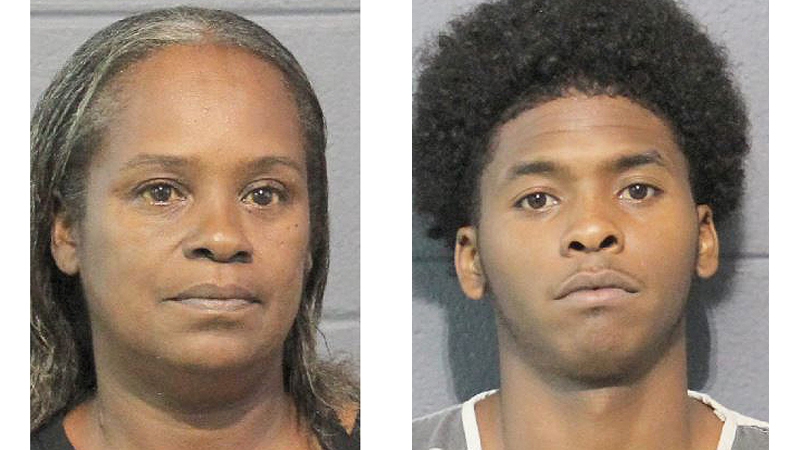 RESERVE — Jau’Keem Jawine Reynaud, 21, of Reserve was arrested Aug. 23 for traffic violations, illegal carrying of a weapon and illegal drug activity in St. John Parish. His grandmother, Melissa Reynaud Bailey, 55, of LaPlace also was charged for interfering with the investigation, according to the St. John the Baptist Parish Sheriff’s Office.

At about 11 a.m. Aug. 23, the Special Operations Division Criminal Apprehension Team was on proactive patrol in Reserve when officers observed a 2011 white Ford Crown Victoria with a shattered windshield enter onto W. Airline Highway from Homewood Place.

As officers attempted to conduct a traffic stop, the driver continued traveling for about a quarter of a mile before crossing into one-way laned westbound traffic, then came to a stop facing east on the westbound shoulder in the 2500 block of W. Airline Highway.

As officers approached the vehicle, they smelled a strong odor of marijuana emanating from inside the vehicle. Officers made contact with the driver, later identified as Reynaud, who did not have a driver’s license. Officers detained him.

Officers then observed on the driver’s side floor board a black digital scale, a container with marijuana inside and a pistol between the passenger seat and door. A passenger, later identified as Bailey, Reynaud’s grandmother, was detained. Officers located two plastic bags containing about 14 grams of marijuana and one plastic bag containing 11 MDMA (Ecstasy) pills on Bailey’s person. Through investigation, officers learned that as they were attempting to stop the vehicle, Reynaud handed his grandmother the illegal narcotics and asked her to conceal them from law enforcement.

Bailey was booked with obstruction of justice– tampering with evidence (felony). She was being held in custody in lieu of a $10,000 bond as of Tuesday afternoon.

Reynaud was arrested for illegal carrying of weapon with a controlled dangerous substance, possession with intent to distribute marijuana (felony), possession with intent to distribute MDMA (felony), vehicle registration expired (misdemeanor), view outward or inward through windshield or windows; obscuring prohibited; driver must be licensed; one way roadways and rotary traffic islands; and possession or distribution of drug paraphernalia first offense (misdemeanor). He was being held on a $37,700 bond as of Tuesday afternoon, according to the St. John Sheriff’s Office.