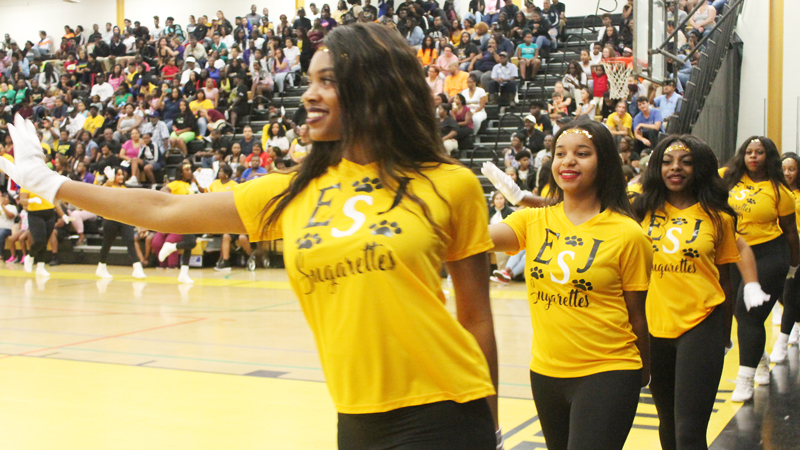 RESERVE – The East St. John High School football team is hoping to make some noise on the field this season.

On Wednesday night, they made some noise in the gym.

The East St. John marching band is ready to roll for 2019.

The 2019 Wildcats led each other in a somewhat rehearsed cheer before they were introduced to a large crowd of parents, fellow students and fans at the annual Meet the Wildcats Night. A tradition for several years now, it’s a chance for Wildcats fans to meet the fall athletes who play football, volleyball and cross country, as well as the cheerleaders, band, majorettes, Sugarettes and flag team.

The event was originally scheduled to be held in Joe Keller Stadium, but was forced indoors by afternoon thundershowers.

Cross country coach Paul Dupuis wants the team to be cheered for this year.

That did not dampen the Wildcat spirit, however.

The band, cheerleaders, Sugarettes, Flag Team and Majorettes all gave rousing performances for the crowd, offering a sneak peek of what fans will see at football games this fall.

“The big thing for me is to get the community behind us,” Brown said. “We’re ready. We need community support. We want everybody to come out and support the kids.”

The cheerleaders perform a high jump at Wednesday’s Meet the Wildcats event.

The Wildcats have high expectations for the season, which gets underway next week with jamborees throughout the area. The team finished 5-7 last season, pulling off an upset win over Hahnville and earning a spot in the Class 5A playoffs for the third year in a row.

“We’re going to be fierce,” Sanders said. “I like seeing people come out. It feels like we have a lot of people behind us.”

Senior safety Shaun Sterling Jr. said the team has a goal this season to Back Up Airline – causing a traffic jam from Joe Keller Stadium to Airline Highway.

“We need people to come out,” he said.

New volleyball coach Yvette Scioneaux acted as Mistress of Ceremonies for Wednesday’s event. The longtime school employee said the gym should be just as packed when her Lady Wildcats play.

We need you to come see them.” For the cross country track team, under the direction of coach Paul Dupuis, it was a chance to get cheered for. Period.