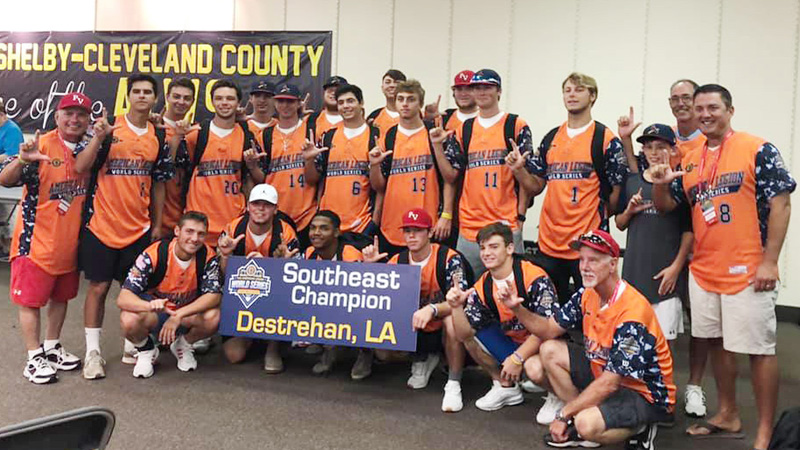 The team takes a few moments for a photo.

SHELBY, N.C. – Pedal Valves seemed to have the pedal put to the metal in the 2019 American Legion World Series after scoring 35 runs in their first three games to win the Stars Division of the bracket.

But the Cardinals ran into a solid team from North Dakota in Monday night’s semifinal, losing 11-4 and putting the brakes on their national title dreams. Fargo advanced to the championship game to be played Tuesday night.

The Pedal Valves participated in the 2019 American Legion World Series.

Pedal Valves, representing Louisiana as the Southeast regional champion, finished its summer season with an impressive 38-9 record, winning 22 of its last 24 games to earn its first trip to the World Series. Louisiana teams have made a record 27 World Series appearances and two in a row. Louisiana lost in last years semifinal as well. The last Louisiana team to win the World Series was Jesuit-based Retif Oil in 2012.

The Cardinals put together and impressive run through Sunday, beating the Illinois champion, 12-1, on Aug. 15; Missouri, 9-1, on Aug. 16; New Mexico, 14-6, on Saturday. After a day off on Sunday, the Cardinals played North Dakota in the semifinals on Monday.

North Dakota also went 3-0 to win the Stripes Division and had to finish its rain-suspended  9-1 win over Massachusetts (a 1-hitter) before playing the semifinal on Monday.

Against Pedal Valves, North Dakota scored two runs in the second inning before a three-hour rain delay interrupted play once more. When the game resumed, Pedal Valves tied the game in the third inning.

But North Dakota pulled away for good in the fourth inning, scoring four runs on a pair of singles and a pair of errors by the Cardinals. North Dakota finished with 13 hits. Pedal Valves had nine.

The Pedal Valves Cardinals advanced to the American Legion Word Series, but fell Monday night to a North Dakota team.

“Tonight we just ran into a really good offensive club that we couldn’t seem to get out,” coach Danny Riehm said. “We had a ton of two strikes counts and just couldn’t slam the door. They were coring in almost every frame and that is tough to overcome. We had a great summer. These guys played so hard and I am extremely proud of them. To got 38-9 against the caliber of teams that we played is tremendous. Making it to Shelby and the American Legion World Series was a remarkable accomplishment that they will remember for the rest of their lives.”

St. Charles Catholic graduate Nick Lorio, who played a large part in the team’s run to North Carolina, hit .333 in the tournament with 4 RBIs. He had one start and one relief appearance as a pitcher, finishing with 6 strikeouts.

“I’m just happy with all that this team has accomplished,” Lorio said. “It’s tough because it didn’t end the way we wanted it to.”

The Pedal Valves team is based in Destrehan, but pulls players from around the New Orleans metro area.