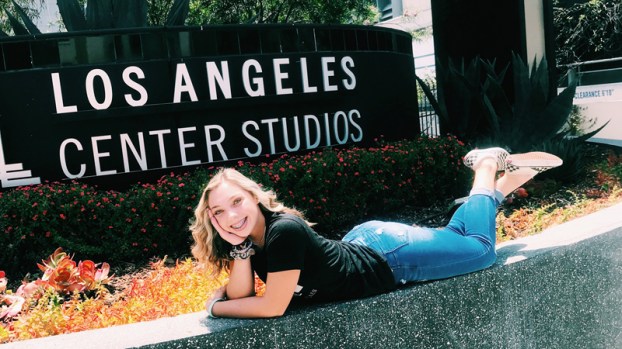 Lauren Aucoin, 18, of LaPlace is moving out to Los Angeles this month to attend Studio School.

LAPLACE — Lauren Aucoin of LaPlace sees herself becoming a back-up dancer for Lady Gaga, Selena Gomez and other hit artists on the Hollywood scene. Alternatively, she could become a talented choreographer who travels the world.

Aucoin, 18, has dreamed of making the big move to New York City or Los Angeles, California since starting high school, and that life-changing moment will soon arrive.

On August 17, Aucoin is moving across the country to attend Studio School Los Angeles, a prestigious institution known for its exceptional commercial arts program and ability to produce entertainment professionals.

Equipped with $13,500 in scholarships, Aucoin was among the 30 percent of applicants accepted into the school. Her stellar contemporary and ballet performances in her audition videos, in addition to two essays, earned her a talent-based scholarship, a Next Generation talent development grant and an Innovation grant.

Aucoin applied for Studio School on a whim after meeting a dancer who recently graduated from there.

“I was kind of hesitant about going to college,” Aucoin said. “I didn’t really have a plan to go to Studio School, but I just started applying places. Once I found out I got in, I started crying. It was like, wow, I can really go here. Even in high school before I was looking at college, I always wanted to move out to either L.A. or New York.”

Lauren Aucoin was among only 30 percent of applicants accepted into Studio School. She was part of an even smaller percentage of talent-based scholarship recipients.

While she loves New York and has visited before, Aucoin is excited to take on California because it’s where all the stars are made.

“You have to be determined,” Aucoin said. “You can’t have a negative mindset. You have to have a positive mindset, train hard and apply yourself every day to be successful in this field. You can’t just wish for it. You have to work for it.”

Aucoin is no stranger to hard work. After attending Archbishop Chapelle for her freshman and sophomore years of high school, she switched to homeschooling to allow more flexibility for studio dance practice.

She’s trained at Aimee’s Dance Academy for the past 6 years but has been dancing much longer. Her weekly schedule includes 20 to 30 hours of studio time and at least another 10 hours of practice at home.

Aucoin also student teaches, and she’s sometimes in the studio until 9:30 at night on Monday, Tuesday, Wednesday, Thursday and Saturday.

“It doesn’t matter if we’re in a dance class, at a competition or anywhere that has nothing to do with dancing,” Jennen said. “She’s always the hardest worker and the one with the biggest heart. I’m kind of a hard teacher where I sometimes ask the impossible of them, and Lauren’s always the first one to try to figure it out and almost break her back trying to do what I ask of her.”

Jennen recently took Aucoin to a dance workshop held near Lafayette. At first meeting, other participants in the class were intimidated by Aucoin’s skill, according to Jennen.

“By the end, they were all hugging her goodbye,” Jennen said. “She totally broke down that wall for them when they were terrified of her. She helped them and inspired them and helped take to another level.”

Surrounded by five to six other girls on stage, Aucoin has the ability to adapt at a moment’s notice to whatever music plays over the speakers.

“Because I have trouble speaking and I don’t like to talk a whole lot, I like to use my emotions through dance and express myself that way,” Aucoin said. “Dancing is really the only way I can escape from anything in my life like stress. If I want to dance, I can dance. I don’t have to worry about being perfect. Everything that’s bothering me, I just dance it out.”

In the six years Jennen has worked with Aucoin, she has seen her mental and emotional connection to dance skyrocket.

“I never thought that I would see that from anyone. It’s really cool to watch someone go from little old LaPlace to big time L.A.,” Jennen said. “You have to have an open mind. You have to be willing to try things, and you have to just keep positive and be a leader. I think Lauren has all of those qualities about her.”

LAFAYETTE – It may go down in history as the day that changed the Louisiana High School Athletic Association forever.... read more