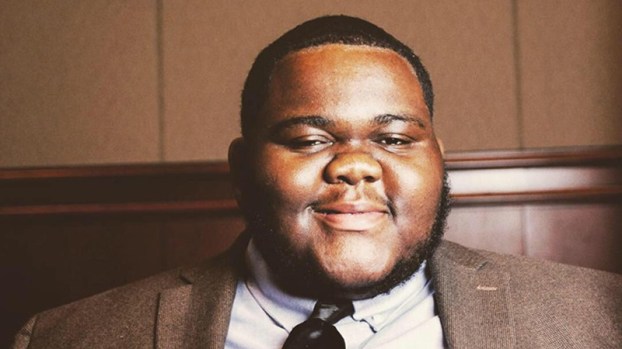 Jordan, a 2016 East St. John High School valedictorian, is laying groundwork for his future while preparing for a successful senior year of undergraduate study at Xavier University

LAPLACE — Jordan Deloch of has dreamed of a career in law since participating in a spirited class debate as a sixth grader at LaPlace Elementary.

With the Law School Admission Test only one month away, the 2016 East St. John High School valedictorian is laying groundwork for his future while preparing for a successful senior year of undergraduate study at Xavier University.

Deloch recently returned from a seven-week judicial internship at St. John’s University in Queens, New York, where he was awarded Most Active Participant during a July 22 closing ceremony.

Deloch’s advisors at Xavier recommended him for the program, which he described as a crash course in the world of law.

Jordan’s family is very proud of who he’s become as a young man.

After the initial weeks of legal writing, mock trials, litigation and critical reading and thinking courses, Deloch was ready to apply his knowledge.

“The first week, I shadowed (the lawyers and judges),” Deloch said. “I watched trials. I watched hearings and conferencing. The second week, I started writing a memo. I witnessed a foreclosure auction and a criminal trial for assault and robbery.”

By the end, Deloch was able to network with a lot of the judges at the Queens Supreme Court. The biggest lesson he’s taking from the internship is that hard work doesn’t go unnoticed.

“Somebody is always watching,” Deloch said. “At the program, I was always asking questions and making contacts and things like that. By the end of the program, I was awarded overall most participation in my program, and I really appreciated that because it told me who I am is being sought out.”

Deloch plans to return to New York for law school admissions interviews. He hasn’t decided yet which school to attend, though he’d enjoy being in New York, Washington D.C. or Tulane University in New Orleans. After his internship, he feels well prepared.

“This program was a way to level the playing field for law students,” Deloch said. “It allowed us to set the table. You always want a seat at the table, but we were able to make up the room. It was a good experience for me because typically students in undergrad don’t get that type of experience.”

Jordan’s older sister, Leah Deloch, has always known her brother is destined for success. The two share an incredibly tight bond, and Leah is never shocked to hear of Jordan’s latest achievement.

“Jordan is the most ambitious person I know,” Leah said. “He’s been that way forever. It’s not something that’s fabricated for any type of recognition. It’s just his personality.”

Leah was 10 years old and her brother was 2 when their family moved to LaPlace. She knows his work ethic firsthand and even served as his honors physics teacher at East St. John in 2016.

“I think he always had this feeling of trying to come out of my shadow because every school he has gone to, he has come after me,” Leah said. “What he doesn’t realize is how quickly it turns from being ‘oh, you are Leah’s brother’ to ‘oh, you are Jordan’s sister.’ He has that appeal and gravitation that allows people to see his greatness.”

Jordan feels well prepared after the internship, as it levels the playing field for law students.

Extracurricular clubs and leadership positions have been part of Jordan’s life since his days at LaPlace Elementary. At Xavier, Jordan was freshman and sophomore class president. He recently served as vice president of the university’s Student Government Association for his junior year.

“What makes me most proud of Jordan is that he’s dedicated,” Michelle said. “He’s a hard worker, and he’s driven. Whatever he says he’s going to do, he usually does that and exceeds it. He’s always set the bar high, and both me and his dad are very proud of who he’s become as a young man.”

While in New York, Deloch also had the opportunity to meet the cast of Good Morning America and take pictures with Robin Roberts.

“That was another plus of the trip,” Deloch said.

RESERVE — Theron Williams, 25, of New Orleans was the first subject arrested in connection to the double homicide that... read more