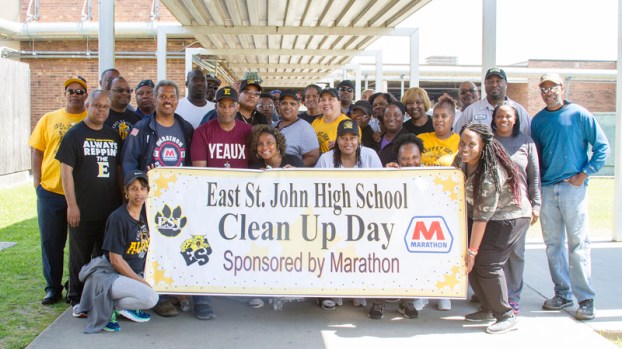 The energy and desire to leave the school better than they found it was contagious, and alumni stayed on-site until nearly 10 p.m. to clean the entrance of the school, pressure wash the breezeway and re-stripe the parking lot with a fresh layer of paint.

ESJ Alumni Association member Autry Alexis II said the fantastic turnout of the first Cleanup Day, aided by volunteers and equipment from Marathon Petroleum Company, was only the start.

A second Alumni Cleanup is scheduled to begin at 9 a.m. Sunday, and Alexis is expecting a grand turnout supported by political incumbents and candidates.

The alumni team brought the St. John School Board President on a guided tour of the campus to observe areas that still need some TLC, including a damaged statue in the courtyard and some cracked pavement in the front of the school.

While the current administration has been extremely supportive of cleanup efforts, Alexis said it’s important for alumni to keep pushing for school upkeep as a priority.

“It’s up to alumni and the community to own it and say, we want you all to do better, and we need to do better ourselves for the school and for our kids,” Alexis said.

There is still much work to be done, according to Alexis, who pointed out some areas of the school have not been touched up with paint or other renovations in more than a decade.

The East St. John freshman building and front entrance sign are among the areas targeted for Sunday’s effort, in hopes that students can start the 2019-2020 school year in a clean and inspiring environment.

Students took notice of the spring cleanup, Alexis said. It’s his hope that the current generation of students will graduate with the same love and respect for their school all members of the ESJ Alumni Association share.

Since its inception in 2017, the Alumni Association has raised more than $20,000 annually through an October tailgate reunion. The funds have supported thousands in scholarships and school renovations.

“Most of the folks I went to college with weren’t as connected to their high schools as we were,” Alexis said. “I think we did a lot together. St. John Parish isn’t very large. Everyone knows each other. There’s a lot of familiarity and family – a lot of relationships that carried on.

“For the older generation, those that graduated in the 70s and 80s, the way we approach all of this is that we had a village outside of our individual households. We have to be a village for these kids who are now facing different challenges.”

From the village, local leaders have emerged, including St. John the Baptist Parish Sheriff Mike Tregre. Alumni who went on to become judges, engineers and entrepreneurs have solidified East St. John’s status as a powerful institution.

Alexis said there’s an authenticity that unites graduates, and everyone has a willingness to help others.

In just one example, an Alumni Association member volunteered to drive a recent graduate to Grambling State University this week when transportation seemed to be a roadblock to education.

This year’s ESJ Alumni Association reunion will be October 11, and those who wish to participate should follow the Esjalumni Reunion Facebook page for updates.

It’s incredible that a single organization was able to extend $16,500 dollars in scholarships this year while still finding time to give back through cleanup days and other organized efforts.

Given more time, there’s no limit to what this group of people can achieve. Every outreach sets a positive example for the next generation to carry forward.

Poché: Summer Reading Program is coming to an end

The Summer Reading Program is coming to an end for St. John the Baptist Parish Libraries.  Each library branch will... read more