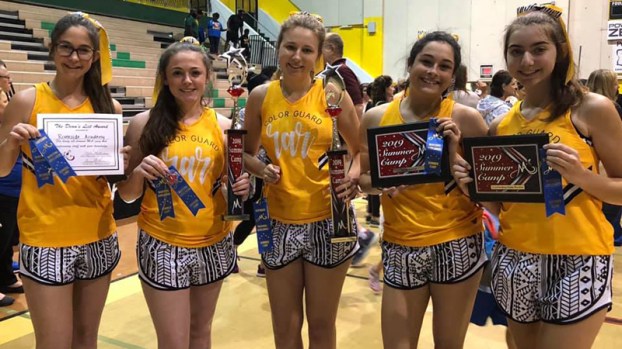 The Riverside Academy Color Guard was named All-Star Performers with invitations to perform at the Citrus Bowl and Macy’s Thanksgiving Day Parade in New York.

Riverside scores big over the summer

RESERVE – Riverside Academy moves in to the 2019-2020 school year with several awards and accolades already under its belt. Each summer the cheer, dance, and color guard teams receive invitations to their respective competitive camps at various locations across the state. They are joined by other Louisiana high schools to present their skills and talents while also learning new routines throughout the week. Each team performed successfully bringing home numerous ribbons, trophies, titles and more!

The Sweethearts show off their competition trophies .

Although a small group, the team made big waves at this year’s camp receiving Outstanding in Home Routine Performance, Grand Champions of the Camp Taught Routine, Team 110% Award for their efforts during camp, and the Dean’s List for their knowledge and having a great impression on the staff. The entire team was named All-Star Performers with invitations to perform at the Citrus Bowl and Macy’s Thanksgiving Day Parade in New York. Two members, Amber Hotard and Patricia Bell, received Honor Roll Performer Awards for going above and beyond during each class. And lastly, a solo performance by Camryn Louque was given a Superior rating.

Riverside Academy continues to hold pride in its students and each of their successes in the classroom and beyond.

As always, We are Riverside. We are One.