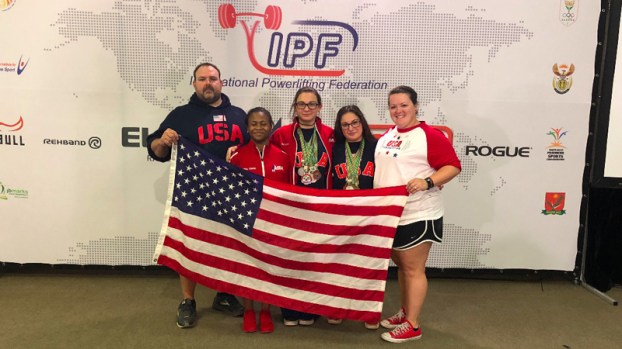 Jon and Kelly Magendie usually look for the shortest – with the most athletic potential. They are the coaches of Lutcher High School’s highly successful women’s powerlifting team. To them, short is better.

“The closer to the ground, the less distance you have to lift the weights,” said Jon, who teaches a career readiness class. His wife, Kelly, teaches math.

It appears to be a winning strategy. As a team, the Lady Bulldogs have won 13 consecutive state championships.

“One, it’s a great school and we have a great group of girls to pull from,” Magendie said. “But we work out, we train, we try to win and the girls do everything we ask them to do over the course of the year. We’ve been very fortunate.”

Of course, to be successful, lifters must continue to train – and compete – even after the high school season ends in March.

Quamecca Stafford and Shay Naquin, both rising juniors at Lutcher High, not only won their weight classes in March, they also won their classes in the National Championships in April. They now have qualified to represent the United States in the 2019 International Powerlifting Federation’s Jr. and Sub-Jr. World Championships to be held in Regina, Canada, in September. Both girls competed last year in Potchefstroom, South Africa, finishing second in their respective divisions.

The group has started a GoFundMe page to raise the estimated $4,500 the trip will cost. Donations may be made at https://www.gofundme.com/f/road-to-regina-canada?utm_source=customer&utm_medium=copy_link&utm_campaign=p_cp+share-sheet (or search Road to Regina, Canada).

Both girls followed their older sisters into the sport, which is divided by weight classes and which incorporates a squat lift, a dead lift and a bench press. The heaviest of each is then combined for a total. The competition is total versus total.

Stafford, referred to by her coach as “the little one” stands all of 4-foot-9 and grew up watching her older sister, Jasmine Davis, compete for Lutcher.

“I watched her all through her high school years and I decided I wanted to try out for it,” Stafford said. “It feels like I can release a whole lot of energy, I guess.”

And, she says, she has grown used to the strange looks she gets when she tells them her sport of choice.

“If they would see me lift weights they would be, like, I can’t believe it,” she said. Stafford’s highest total lift is around 898 pounds.

Naquin also followed an older sister to the sport and didn’t need much convincing to follow in her footsteps. Her highest total is 1,014 pounds.

“I saw how much fun my sister had and how they really were like a family,” Naquin said. “I was so glad to be a part of that. I love having to challenge myself over and over each year to get better. It was really helpful having a sister in it because, for a while, that gave me motive to do better than her. Now that she’s not lifting anymore, I’m just striving to be the best I can be.”

Naquin said that family atmosphere is what helps make the Lutcher team so great.

“I think a lot of it really is the family bond we all have together,” Naquin said. “Any problem that we have we all talk to each other. It’s a real good thing to have.”

GRAMERCY – Sean Q. Thomas, 26, of Vacherie, was killed in a tragic accident shortly before 5:30 a.m. Wednesday on... read more