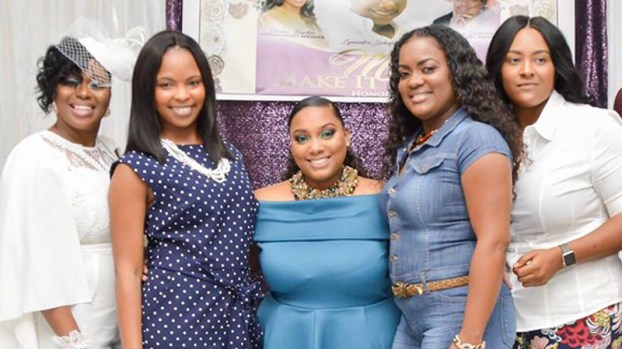 NORCO — Single mother Lynnietra Schofield had a vision to uplift women in a positive and supportive environment, letting those in harrowing situations know they are never alone in their fight.

Last year, she made it happen.

The second annual Mz. Make It Happen women’s empowerment event, themed “I Survived It,” will share the stories of four area women who handled life’s sourest lemons with grace and inspired others in the process.

Schofield said all women are invited to enjoy food, music and prizes from 2 to 6 p.m. July 27 at 424 Clayton Drive in Norco. Tickets are $10 per person, and Schofield promises every attendee will leave with a keepsake and an expanded network of people to depend on.

Those in attendance may be blessed with gas cards, groceries or cash to help with school supplies and uniforms. Community vendors including makeup artists will be on site, and women will have a chance to win electronics and vouchers for automotive detail work.

“It’s a women’s empowerment event geared towards single mothers but not excluding any others,” Schofield said.

“I’m a single mother, and I know how hard it is sometimes for women to make it. Day in and day out, regardless of the situation we are going through, we still need to make things happen for our kids. I want to share my experience with other women and just let them know that they’re not alone. Somebody is in their corner.”

Peter Moseby has helped Schofield organize the event. He said last year’s Inaugural Mz. Make It Happen was immensely successful, and a larger venue has been secured for this year to account for the expected turnout.

“Last year, there was only standing room left,” Moseby said. “It must have been 100 to 120 people. I’m expecting an even bigger turnout this year. These women are looking for someone they can lean on; someone they can relate to.”

According to Moseby, people find comfort in those who can teach from experience, and compassion builds a stronger connection.

“There’s a saying that no one wants to know how much you know until you show how much you care,” Moseby said. “Lynnietra has shown herself to be a caring person. She is a single mother, and she’s amazing and very supportive of her kids. She’s supportive of the people in the community.”

Schofield wants to give accolades to four individuals who have inspired her to stay strong.

One of those individuals is honoree India Scioneaux, a River Parishes West Bank resident. Schofield first saw Scioneaux on a Facebook live broadcast of her wedding.

The image of Scioneaux pushing her husband down the aisle in a wheelchair never left Schofield’s mind. About a year later, she learned Scioneaux had been diagnosed with a brain tumor the size of a golf ball.

This week marked the one-year anniversary of her diagnosis, and she is thankful for the little things in life that followed her operation.

Schofield met honoree Sherrie Ashante at a hair salon in LaPlace. According to Schofield, Ashante has the ability to stay positive throughout any situation. Her positivity was infectious, even amid a battle with breast cancer.

Schofield has known honoree Herbrena Gordon of St. James Parish all of her life, and she considers her a true survivor. While living with multiple sclerosis, Gordon never misses an opportunity to help her friends or her community.The fourth honoree is Shiloh Anjelyse, who Schofield met through a dance ministry. According to Schofield, Anjelyse would sometimes get sick in the middle of a ministry, but she always fought through it and made it to the end.

“They all have different stories, but all of their stories are about survival,” Schofield said, adding women should celebrate overcoming all of life’s battles, whether the challenge is depression, stress or low self-esteem.

“I feel like this year’s event is going to be phenomenal,” Schofield said. “There’s a greater cause in what I’m doing, and I’m not going to stop.”

Follow Mz. Make it Happen on Facebook for ticket information or to donate to the cause. All proceeds will be used to bless women, Schofield said.

In memory of Sarah James: Local LSU student struck down in automobile accident