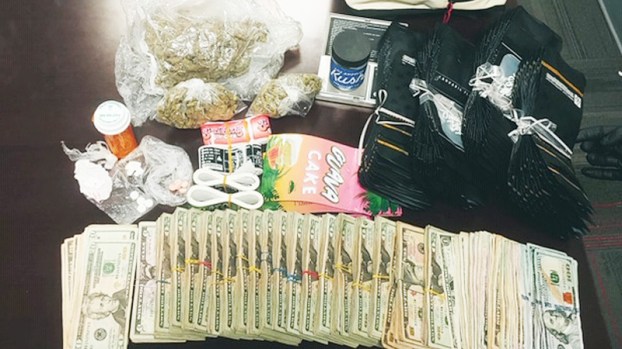 According to the St. John Sheriff's Office, the drugs and cash pictured above were found on Terrell Williams at the time of his arrest.

LAPLACE —Terrell Michael Williams, 28, of LaPlace and Rico Jermaine Jones, 28, of Reserve were arrested July 10 in connection to a crowd control incident at a local business that led to officers discovering illegal drugs and firearms.

At about 8:45 p.m. May 26, deputies with the St. John the Baptist Parish Sheriff’s Office responded to a business in the 600 block of West Airline Highway in LaPlace in reference to loiterers in the parking lot.

Upon arrival, as officers were dispersing individuals, officers smelled a strong odor of marijuana emanating from the area of several vehicles parked in the lot. Deputies then observed a plastic bag of marijuana and a rifle on the driver’s side floorboard of a vehicle in the parking lot.

Shortly after, a search warrant was executed on the vehicle. Inside the vehicle, officers discovered three pistols and a plastic bag with 3.5 grams of marijuana. Searching the vehicle’s trunk, officers located a backpack with 17 bags of marijuana — 16 bags contained 29 grams each, and one bag contained 19 grams — a digital scale and a box of clear plastic bags.

Through investigation, officers developed Williams and Jones as suspects. Based on investigation, detectives obtained judicial warrants for William and Jones’ arrest and executed the warrants July 10.

Marijuana found several bags of marijuana in a vehicle during a May 26 search.

Jones was arrested without incident after investigators with the Special Operations Division began surveillance on his residence in the 200 block of East 30th Street in Reserve. Jones was observed leaving his residence and taken into custody.

Simultaneously, investigators were conducting surveillance on Williams. Investigators observed Williams at his residence in the 8800 block of Sunnyside Drive in LaPlace. As investigators moved in to apprehend Williams, he attempted to flee from the back of the residence.

A rifle was located on the driver’s side floorboard of the vehicle, according to police.

He was apprehended while in possession of a backpack containing illegal narcotics, including approximately 300 grams of marijuana packaged for distribution, seven Percocet tablets, five Adderall tablets and five Loratab and materials necessary for the distribution of illegal narcotics.

Once in custody, investigators obtained a judicial search and seizure warrant for William’s residence. In the subsequent search, investigators located a large amount of U.S. currency as well as items further connecting Williams to the recovery of illegal narcotics and weapons from the May 26 incident.

Officers found three pistols inside of the vehicle.

Williams was arrested for possession or distribution of drug paraphernalia first offense, illegal possession of stolen firearm, illegal carrying of weapon: use weapon/violent crime or controlled dangerous substance and possession with intent to distribute marijuana.