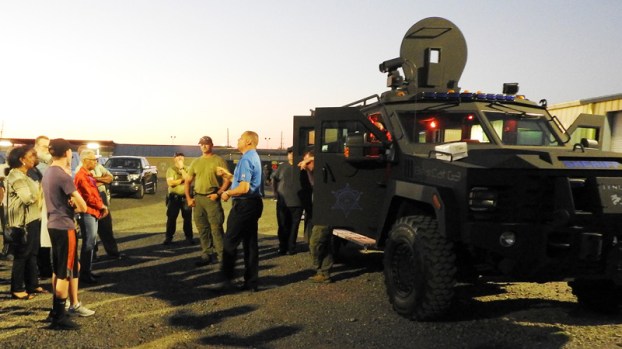 LAPLACE — Nick Rose of LaPlace was interested in law enforcement from the time he was small, whether it meant playing cops with friends or taking on hall monitor duties in elementary school.

That vision returned to focus in 2018, after Rose was struck by a car in a horrific senior trip accident that left him in a coma with uncertain odds of recovery.

However, healing came little by little, and the St. John Sheriff’s Office was there to support Rose every step of the way.

He was one of 18 participants to graduate from the third annual course June 27 at the Patrol Headquarters in LaPlace.

Community members got an informative and interactive look behind the scenes of the Sheriff’s Office over the course of the program. Through lectures and demonstrations, they learned how officers carry out a mission to protect and serve in various departments.

Lifting fingerprints, using tasers and exploding entryways were among the demonstration highlights. At the last session before graduation, the group also had the opportunity to participate in a use-of-force simulation and discuss use-of-force issues with officers.

Rose enjoyed learning about the technology used in law enforcement, especially when he saw license plate cameras lead to the identification of a stolen vehicle last month in LaPlace.

According to Rose, Citizens Academy also explained the importance of working with the community and using non-lethal tactics to protect lives during charged encounters.

“You can’t be a hostile person,” Rose said. “You have to be able to talk to the citizens of St. John without bias and lay out the rules and the consequences. You have to be a people person and know how to talk to your community. If people commit crimes, I think sometimes it’s because they don’t have anybody to listen to them and talk to them.”

In recent months, Rose had his final surgery to replace part of his skull. He’s worked with a neuropsychologist to return to find a new, post-brain injury normal.

He wants people to know Citizens Academy is free and worthwhile to all community members.

Other Citizens Academy participants were no strangers to law enforcement. René Phillips, a St. John the Baptist Parish educator and 30-year police veteran, recently transferred from the New Orleans Constable’s Office to SJSO as a reserve officer.

Phillips took the Citizens Academy course to familiarize himself with the inner workings of the local department.

“St. John Parish is a small police department, comparatively speaking to my experience with several different agencies, but I was extremely impressed as far as the training, the equipment and the overall professionalism of the department,” Phillips said. “The sheriff has gone out of his way to provide extensive training to all of his employees, as well as giving them state-of-the-art equipment to be able to better perform the duties that’s asked of them.”

Phillips is already encouraging his wife and daughter to sign up for the 2020 Citizens Academy, which he feels is a vital step forward in the current climate of law enforcement perception.

“It’s an experience I think should be replicated in every law enforcement agency around the country,” Phillips said. “With the rise of opposition and social media airing all of the negative aspects of law enforcement, there’s been a wedge driven in between the community and law enforcement.”

When not in uniform, even now, Phillips experiences the same profiling endured by African-Americans across the country. Conversely, wearing the uniform has at times made him feel ostracized from members of his own community.

Fostering understanding between both sides and recognizing bad officers are few and far between is key to resolving differences, according to Phillips. He hopes to serve as a liaison to the community moving forward.

Sheriff Mike Tregre congratulated each participant at graduation and gave the crowd one final assignment before they were dismissed.

“Share the knowledge you gained with others,” Tregre said. “Encourage your family members and friends to join us next year at Citizens Academy. We’re always willing to talk about our department, but it is that much more meaningful when a citizen hears about our work from another citizen.”
Tregre gave special thanks to Officer Bernell Charles, who organized and implemented the program.

No injuries in LaPlace house fire

LAPLACE – No one was injured in the Saturday evening fire that burned a gaping hole through the roof of... read more