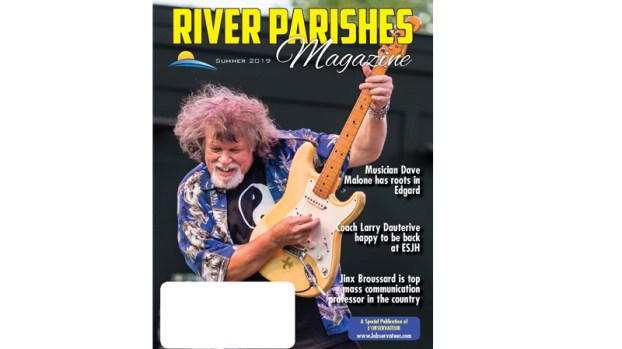 Before taking the country by storm in The Radiators from 1978 to 2011, singer and songwriter Dave Malone grew up in a military family constantly on the move.

He was in a different school every year from first to seventh grade, bouncing between Houma, Montgomery, Alabama and a little Michigan town 10 miles from the Canadian border.

However, Malone identifies himself as “another River Rat from Edgard.” Between the moves, his family returned to the West Bank of St. John the Baptist Parish. It was there he discovered a passion for music and cherished his “Huck Finn” style upbringing, centered on River Road and the bend of the Mississippi River.

I had a chance to speak with Malone in the spring. Now semi-retired, he traced his path in the music industry from a high school band in St. John Parish to national tours.

His story is featured in the River Parishes Magazine Summer 2019 edition, along with the profiles of other area natives who have gone on to accomplish great things.

Jinx Broussard has an office at Louisiana State University, filled with awards, family pictures and keepsakes from unforgettable professional moments. Among those is the 2018 Scripps Howard Foundation Teacher of the Year award, marking her the top mass communication instructor in the country.

“Sometimes it’s hard to believe a girl from the plantation made it this far,” Broussard said, referring to her roots at Laurel Ridge Plantation.

A native of Vacherie, Broussard knew she wasn’t a country girl at heart. While picking crops in the fields she imagined herself “interviewing the president, meeting the pope or going to Buckingham Palace.”

She went on to become the first African American to graduate from LSU with a bachelor’s degree in journalism.

Also featured in the magazine is legacy coach Larry Dauterive, who recently returned to East St. John High School as an offensive coordinator.

Though he had been out of coaching completely for seven years, Dauterive knew it was always in his blood.

“You can’t do something for 44 years and not miss it when it’s over,” Dauterive said.

When Wildcats head coach Brandon Brown approached chance to return, it was a no-brainer.

A former East St. John head coach from 2002 to 2010, Dauterive went 65-22 during his time with the Wildcats. His imaginative offensive vision guided him to an overall prep coaching record of 228-65-1 and recognition in the Hall of Fame.

Dauterive is back into the swing of summer football routine, and he’s especially excited about working with quarterbacks Sean Shelby and Marcus Jackson.

Travel further down the river, and one will find St. Joseph Plantation in Vacherie.

River Parishes Magazine readers can learn the rich history of the site, including the story of Miss Blanche Simon.

Tante Blanche, as she was called, lived alone in a section of the house. She was known to make a pot of piping hot vegetable soup every day to share with friends and neighbors in the 1970s.

Blanche was the last person to live in the house, which was built around 1830 by the Scioneaux family using slave labor. Following Blanche’s death, St. Joseph remained closed until it was re-opened for tours in 2005.

The plantation has been used as a backdrop for Hollywood films and television shows. Each October, St. Joseph offers a Mourning Tour to help visitors learn about the Creole customs and superstitions surrounding death.

The summer magazine also includes an account with my experience in the Rape Aggression Defense course offered to women through the St. John Sheriff’s Office.

I had no idea how valuable the one-day class would be. Far more than just a time commitment on the weekend, the R.A.D. class presents essential skills accessible to any women, no matter her age, size or perceived strength.

River Parishes Magazine copies can be picked up for free at our newspaper office, located behind Destiny Christian Center on Main Street in LaPlace. Give us a call at 985-652-9545 or find us on Facebook to learn of other distribution locations within the community.

Brooke Robichaux is news editor at L’OBSERVATEUR. She can be reached at brooke.robichaux@lobservateur.com .

Are you itching to uncover your grill and fire it up now that the warm weather is... read more