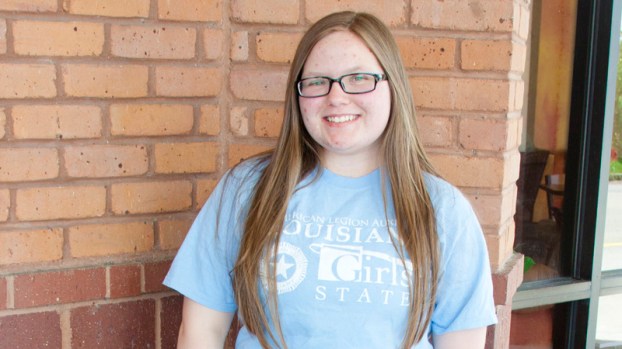 Chloe Revere, a rising senior at East St. John High School, is looking forward to a career in physical therapy.

Chloe Revere learns to be a leader at Girls State

RESERVE – To achieve her goals of becoming a first-generation college student and leaving her mark on the world in the physical therapy field, shy and quiet Chloe Revere decided it was time to step out of her comfort zone.The rising East St. John High School senior recently returned home from Louisiana Girls State, held June 23-29 at Northwestern State University in Natchitoches. Along the way, she built lifelong friendships and learned what it takes to become a leader.

Chloe Revere was the only representative from East St. John High School to attend Girls State.

Held annually in the last week of June, Girls State instills pride in American citizens while promoting greater understanding of government traditions, from the role of the court system to bills and the voting process. Chloe was the only student to attend on behalf of East St. John after an interview process with American Legion Auxiliary members.

“They asked how I feel about women in government and whether I saw myself as a leader,” Chloe said. “After going to Girls State, I would say I’m more of a leader now than I was before. You don’t really have a choice but to get out of your shell if you are in one. You just have to do it because it’s what you make of it.”

Constant cheering to encourage other participants was one step out of her shell. Additionally, each girl in attendance had to talk in front of her peers to run for a city, parish or state office. Chloe was the city health official, responsible for returning washed shirts to participants and keeping the common area clean throughout the week.

Farewell songs turned somber on the last day of Girls State, when Chloe realized the experience was well worth it.

“You get four hours of sleep every night and you really want to go home, but you stick through it,” Chloe said. “In the end, you don’t want to go home.”

Chloe plans to take the lessons back to East St. John, where she’s a 4.0 student, a four-year volleyball player and a recent Beta Club inductee.

While she’s learned a lot about government, it’s not what she sees herself studying after high school. A shoulder injury from volleyball sparked her interest in physical therapy, and she plans to pursue a kinesiology undergraduate degree at whichever college extends the best scholarship offers.

“When I went to physical therapy a few months ago, the environment was very homey,” Chloe said. “It felt right, and I enjoyed being there even though I was in pain. I talked to them about they became physical therapists, and it just sounds like something that I would enjoy doing.”

Helping others is one of Chloe’s specialties, according to her mother, Michelle Brosette.

“She’s a go-getter,” Michelle said. “She’s always working toward getting better and always working to help someone else. She’s learning about her future endeavors and what she wants to do.”

Michelle is most proud of the hard work Chloe puts into everything she does, from schoolwork to athletics and showing support for her peers.

When she’s not playing travel volleyball or working alongside her mother at the trophy shop on River Road, Chloe likes to stay abreast of environmental concerns.

“I try to limit the amount of one-use waste because a lot of it’s going on,” Chloe said. “I use reusable cups. It’s pretty important to me because I just don’t like seeing all of the trash everywhere.”

RESERVE — At a few months short of 99 years old, Norris Stein Jr. is one of the few remaining... read more