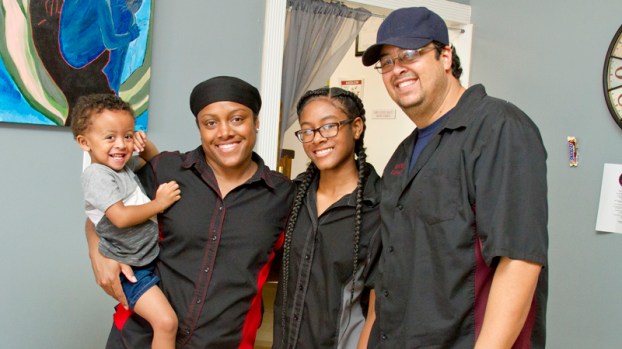 LAPLACE — ZoraChristina Catering & Café has been called “St. John’s best kept secret” by customers, but owner Dr. Monique McGee-Duronslet would rather be widely known for out-of-the-box, Creole-style cuisine in a local and convenient location.

The restaurant, located at 2003 W. Airline Highway in LaPlace since 2016, recently found some recognition as a featured participant in the second annual New Orleans Black Restaurant Week.

The celebration continues through Sunday to spotlight African American, Caribbean and African cuisine and chefs. Culinary experts from black-owned eateries traveled to New Orleans from Atlanta, Houston, Philadelphia and other major cities to participate in the renowned event.

Monique and her husband, Michael Duronslet, were part of the exclusive NOSH Culinary Showcase June 29.

Dr. Monique McGee-Duronslet was invited to do a chef demonstration Saturday in New Orleans.

They also treated guests to Shrimp Salad Inez, a combination of gulf shrimp, shredded lettuce and Cajun spices tossed in Greek yogurt and mayo and topped with shredded carrots and stained cucumbers.

However, the highlight of the night came when Monique was invited to do a culinary demonstration, filling the vacant spots of two chefs who didn’t show.

“I enjoyed the experience and the exposure,” Monique said. “I met a lot of great people and chefs. Earlier that morning, I prayed and asked God what else I could do to make this work and how could I get more exposure. Mid way through the event, I was asked to fill in for the Chef Demonstration due to the absence of one of the chefs. I then laughed and said to myself ‘God, I like your sense of humor, let’s go.’”

“It’s an opportunity to actually let everyone know that we exist, especially for people in our community who still don’t know that we are here,” Monique said. “I want people to know it’s not just New Orleans that has that good, Southern cuisine and creole food. We have similar food, if not something a little more out-of-the-box here. Instead of crossing the Spillway Bridge, you can stay right here on this side of the spillway and enjoy that same type of meal for cheaper.”

The New Orleans Black Restaurant Week opportunity fell into the laps of the Duronslet family on a recommendation from catering customer LaToya Bullard-Franklin.

“It’s not something I went looking for,” Monique said. “It came to me, and I’m happy that I have customers that think so highly of us and our food to recommend us to big organizations.”

Monique’s path to becoming a chef wasn’t typical. She met Michael working in restaurants while pursuing a nursing degree. A chef of more than a decade, Michael had worked at Petra Restaurant and at Metairie’s Ruth Chris Steak House, among other restaurants.

When Michael went to work for the St. John Sheriff’s Office and Monique became a nurse, the two parted ways temporarily.

The road to ZoraChristina was paved by grief after Monique gave birth to a stillborn baby girl, named Christina. She delivered at five months gestation after hoping and praying week-by-week that her daughter would survive her Turner Syndrome diagnosis.

Monique turned to prayer and painting, then to cooking.

After marrying in 2016, Michael and Monique opened ZoraChristina Catering & Café with a laidback, hole in the wall atmosphere.

The decision to open was largely shaped by Monique’s older daughter, Zora, who convinced them a physical restaurant was preferable to the food truck option they were considering.

Zora works in the restaurant, and a few of the food selections are named after Michael and Monique’s 2-year-old son, Dominic.

Menu selections have an extra “oomph” of flavor, according to Michael, who said the crawfish bread, blackened shrimp wrap and chicken wings with zesty sauce are customer favorites. The owners also offer a giant “Dominic burger” as big as their toddler’s personality.

Monique said dishes are creative and made with love.

“When we’re in the kitchen, we cook for family,” Monique said. “Our customers are our family. We put our heart and soul into it.”

NEW ORLEANS — For the fourth year in a row, Whitney Plantation will host a booth at Essence Festival, the... read more