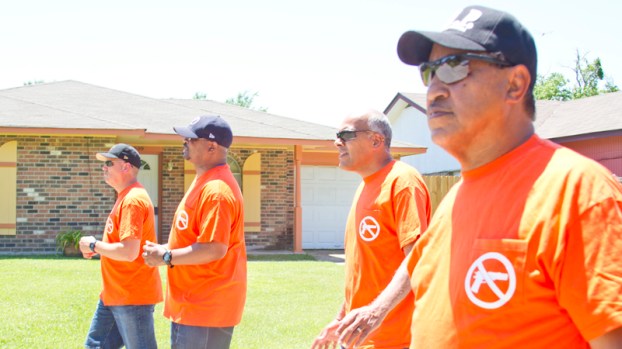 RESERVE — Residents of the Homewood Subdivision opened their front doors and waved as a group of St. John the Baptist Parish clergy, elected officials and concerned community members marched against gun violence Saturday afternoon in Reserve.

Clad in orange T-Shirts for gun violence awareness, participants used a guided prayer walk to bring attention to issues afflicting the youth of the community.

The walk, organized by Pastor Devin Mason, stretched from the front of Homewood to New Rescue Mission Baptist Church in observance of the May 30 Homewood drive-by shooting.

A similar prayer event was held Sunday in front of the Cambridge subdivision.

Participant Tammy Houston said cooperation is key to bringing peace to the community.

“I think it will take all elected officials to work together,” Houston said. “It doesn’t matter which branch of government — be it the council, the administration or the sheriff’s office. The elected officials are the voice of the people. That’s a big responsibility to find solutions for problems in our community. One of the biggest problems is violence, so we all have to work together so we can preserve our youth.”

According to Mason, it’s important for the community to be proactive, rather than reactive, when addressing violence concerns.

When a young man inquired about the reason for the march as he watched from his front yard, Mason felt hopeful the message was being heard and starting conversation within the community.

He hoped to show the public there are caring people willing to band together for the good of St. John Parish, not just in times of tragedy, but also in times of celebration.

It was a sentiment echoed by St. John Councilman Lennix Madere Jr.

“A couple of weeks ago, I went to a balloon release in Homewood,” Madere said. “Somebody died. You don’t release balloons when someone dies. It should be a release for joy, happiness or for graduations, or something like that. That’s what this is all about. It’s all about the kids and stopping the violence.”

He called the Saturday’s meet-up an “approach in the right direction” for standing against gun violence.

Sheriff Mike Tregre noted a majority of the people killed in St. John Parish fall victim to gun violence. Step one of the solution, according to Tregre, is a strong partnership between the residents and the St. John Sheriff’s Office.

While arrests are a step toward safety, Tregre said the heart of the violence problem is rooted much deeper.

“We can’t just put people in jail; we need to be out there rehabilitating,” Tregre said. “We need to reach out to everyone’s child, every little kid, and let them know St. John Parish is safe. St. John has true potential. There are good people here. If we keep coming together, there’s strength in numbers.”

Rysean Brown, who also participated in Saturday’s walk, recently hosted the first “Ball Out Friday” at Regala Park in Reserve to give youth a positive outlet. He said more than 70 children attended last week to play basketball, despite the threat of bad weather.

Free basketball and cabbage ball games for youth ages 11 to 21 will continue this Friday at 5 p.m.

(Editor’s Note: This story has been updated since first publication to attribute a quote to Tammy Houston.)