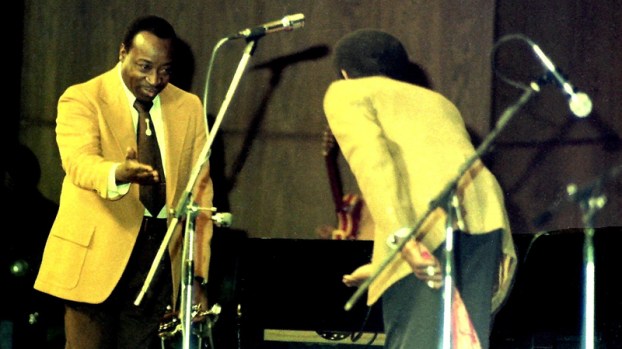 Dave Bartholomew, left, is pictured with New Orleans musician Fats Domino in 1977. The partnership between the two lasted decades and culminated in dozens of hits.

He is rock and roll: Hall of Famer & Edgard native Dave Bartholomew dies at 100

EDGARD — Those who knew legendary New Orleans trumpet player, songwriter and producer Dave Bartholomew say he was a man of discipline, unfailing morals and love for his Edgard roots.

He was born on Christmas Eve 1918 in Edgard and went on to usher in the era of rock ‘n’ roll before it even had a name.

Bartholomew wrote many of the earliest hits within the genre and defined the New Orleans sound in his talent scouting abilities, which led to the discovery of Fats Domino and other musical icons.

“He brought his whole band, orchestra and all, and they played music,” Watson said. “That’s when I realized how great this man was. The music was beautiful. He was beautiful. One of the things I admire about him is a lot of people make it big, but Dave is one of the guys who came back and said, ‘I am not claiming New Orleans. I’m not claiming New York. I’m from Edgard, Louisiana.’”

Watson personally introduced Bartholomew as a special guest at an education, employment and empowerment festival organized by the West St. John Community Action organization in 2014.

“He was very happy to be back in his hometown of Edgard,” Watson said. “Where West St. John is, that’s where he was born, maybe about a half a mile from the school. He pointed his finger toward the railroad track and said, this is where I was born and raised.”

Bartholomew’s son, Don Bartholomew, said his father never lost his connection to St. John the Baptist Parish, where a few of his relatives still reside.

“Country Boy” was one of the songs Bartholomew performed.

However, most of his contributions to the music world were in his non-performing roles. He wrote more than 40 hits for Imperial Records in the 1950s alone.

Bartholomew learned to play the tuba in his youth and performed in bands with much older musicians. He moved to New Orleans as an adolescent and played trumpet on a Mississippi riverboat, eventually becoming leader of Fats Pinchon’s band.

Bartholomew’s recording career traces back to 1939, while his popularity skyrocketed after the 1949 mega-hit “The Fat Man.”

Hailed as the first rock ‘n’ roll record and performed by Fats Domino, the song was penned by Bartholomew. The partnership between Bartholomew and Domino lasted decades and culminated in dozens of hits.

Despite popular belief, the two never wrote songs together, according to Don.

Stella Edwards and Dave Bartholomew posed together at West St. John High School during a 2014 celebration.

Bartholomew wrote and produced recordings for several other artists, including Smiley Lewis (“I Hear You Knocking” and “One Night”) and Shirley and Lee (“Let the Good Times Roll”).

Big-time performers went on to record many of Bartholomew’s songs. “Ain’t That a Shame” was recorded by Pat Boone, and “I Hear You Knocking” went to Gale Storm and Dave Edmundsin. Meanwhile, Ricky Nelson found a hit in Bartholomew’s song “I’m Walkin’,” and Elvis Presley recorded both “One Night” and “Witchcraft.”

Don said his father was a humble person, never affected by his fame.

“He’s a tremendous musician and songwriter, but times that one thousand in fatherhood,” Don said. “He was a very disciplined man. He let us know when it was time to have fun and time to take care of business. There was no in between. Either it’s right or its wrong.”

Though he seemed tough around the edges, Bartholomew was incredibly loving and wanted to better those around him by passing on his wisdom, according to Don.

Bartholomew will be laid to rest Monday, July 8, with a “Blue Monday” funeral at St. Gabriel the Archangel Church at 4700 Pineda Street in New Orleans.

In a statement released Thursday, the Bartholomew family gave thanks for the outpouring of support shown by friends, family and fans worldwide.–

NEW ORLEANS — While the price of providing horseback riding classes has skyrocketed to about $80, the New Orleans Therapeutic... read more