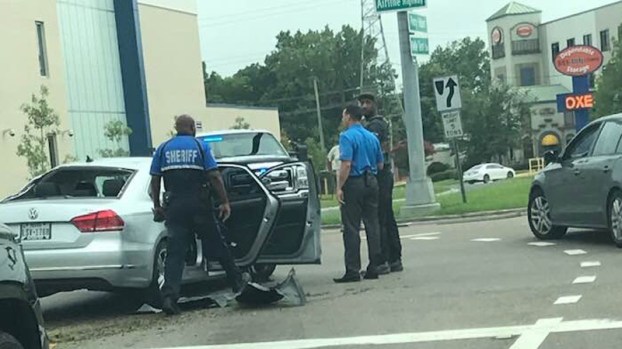 LAPLACE – Two New Orleans men are in custody after Wednesday’s pursuit of a stolen vehicle southbound on Belle Terre Boulevard in LaPlace, according to the St. John the Baptist Parish Sheriff’s Office.

At approximately 2:30 p.m. Wednesday, deputies attempted a traffic stop on a vehicle reported stolen after officers observed the suspects pumping gas at a convenience store on Belle Terre Boulevard.

As officers attempted to make contact with the other suspect, later identified as Brown, sitting in the driver’s seat, Brown fled southbound on Belle Terre Boulevard. During the brief pursuit, Brown rammed into the rear of a parish vehicle then crashed into a patrol unit near the intersection of Belle Terre Boulevard and Airline Highway. Brown then fled on foot. Shortly after, Brown, who initially gave officers a false name, was apprehended.

Brown and the driver of the parish vehicle were treated at a local hospital and released. No officers were injured.

Officers obtained a search warrant for the vehicle and located two handguns, one reported stolen from New Orleans, inside the vehicle. Deputies also located plastic bags of crack cocaine, heroin and marijuana set for distribution.

A bond has not yet been set for Davenport.

He also was placed on hold for the New Orleans Police Department. A bond has not yet been set for Brown as of press time.

Be a Girl With Goals: LaPlace 14-year-old publishes second novel

LAPLACE — Sydney Stewart of LaPlace wasn’t yet 11 years old when she became a published author in 2016 with... read more