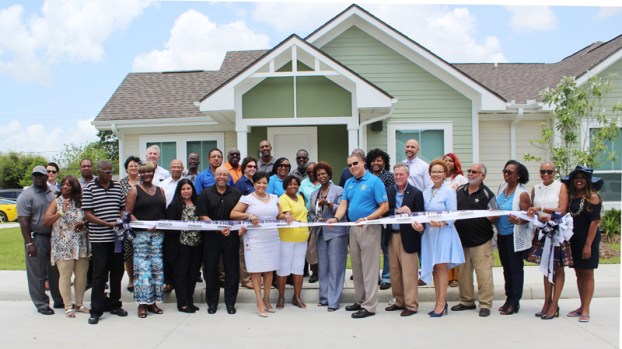 Community officials and supporters celebrated the opening of Garyville Oaks, located on Historic East Street, with a ribbon cutting.

GARYVILLE — There is “no comparison” between the newly constructed Garyville Oaks apartment complex and the demolished public housing units built at the same site in the 1960s, according to Trina Sanders, executive director of the St. John Housing Authority.

Parish officials and community members celebrated the completion of the site with a ribbon cutting last week.

During construction, 15 buildings with 36 public housing units plus one non-dwelling building were demolished, leaving room for a second phase of future development.

“The units that were demolished were built in the 1960s without any type of amenity,” Sanders said, adding the redevelopment gives tenants access to central air conditioning, larger bedroom sizes, adequate storage space, dishwashers and garbage disposals.

Bike kiosks and landscaping were designed with children and families in mind, to give Garyville Oaks a sense of community, according to Sanders.

The new mail center and bike pavilion at Garyville Oaks was designed with children and families in mind.

“The units are comparable to any market rate units being built today,” Sanders said. “I’m just excited about the opportunity to bring beautifully affordable housing to St. John the Baptist Parish, serving low-to-moderate income families. Everyone is deserving of a beautiful community and a safe environment, and that’s what I’m hoping this community will bring to Garyville.”

The first families moved into the apartments in early June, Sanders said, and space is still available. A waiting list will be opened in early July for online applications.

As with other St. John Housing Authority properties, monthly rent is based on 30 percent of the household gross income.

However, Garyville Oaks is not considered public housing. According to Sanders, the new development is part of a project-based voucher program in the Rental Assistance Demonstration, overseen by the U.S. Department of Housing and Urban Development.

Sanders said that the Department of Housing and Urban Development is moving toward the multi-family setup, including a stricter intake process to place the best possible stewards in the units.

“The rental assistance demonstration program is important because basically that’s where the model of housing is leading to,” Sanders said. “It’s one of the models HUD is encouraging housing authorities to consider.”

Parish President Natalie Robottom said Garyville Oaks would have a positive impact on the future of St. John Parish.

“Garyville Oaks will be more than just a home to its residents; it will serve as a beacon of hope to the entire community,” Robottom said. “It should serve as a reminder that there first must be a vision before development is a reality.”

Real estate development and management company Columbia Residential worked with Parish staff and the Housing Authority since the project’s inception in 2014. GEC and Block Construction join in later to complete construction.

The redevelopment was funded through a Hurricane Isaac Community Development Block Grant.

In total, $5.3 million was allocated to the demolition and reconstruction of Garyville units, many of which were made uninhabitable from flood and wind damage sustained when Hurricane Isaac struck in 2012.

Demolition work is still ongoing, according to Sanders, who said the St. John Housing Authority is awaiting approval to remove the last of the old units.

Stars on the rise: Young artists take on NOCCA