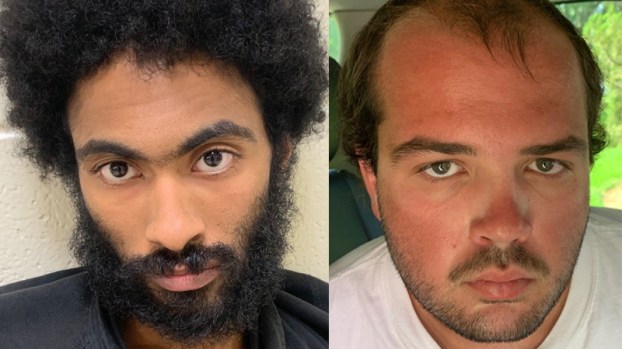 Juine Foster, 23, of Reserve, and Cody Andry, 22, of LaPlace, were arrested Friday for possession of pornography involving juveniles.

RESERVE — Two St. John the Baptist Parish men were arrested Friday for possession of pornography involving juveniles, according to police, who confirmed one of the suspects is charged with more than 100 counts of the crime.

Juine Foster, 23, of Reserve, is charged with 115 counts of pornography involving juveniles under the age of 13.

His arrest was the result of a joint investigation between the Louisiana Bureau of Investigation Violent Crimes Unit and the St. John the Baptist Parish Sheriff’s Office.

Special agents received a “CyberTip” from the National Center for Missing and Exploited Children. Further investigation revealed Foster to be in possession of multiple images of child sexual abuse.

On June 21, agents executed a search warrant on the residence of Foster and recovered evidence relating to the charges.

Cody Andry, 22, of LaPlace, is charged with one count of pornography involving juveniles under the age of 13, possession or distribution of drug paraphernalia first offense and possession of schedule 1 controlled dangerous substance.

As in Foster’s case, agents began investigating Andry after receiving a digital tip from the National Center for Missing and Exploited Children.

Andry was released from custody Saturday after posting a $28,000 bond, according to the St. John Sheriff’s Office.

“They came down and said they needed our assistance to make an arrest,” Tregre said. “We went out there to help them.”

The two-month initiative sought to identify, apprehend and prosecute those who produce, distribute, receive and possess child pornography; engage in online enticement of children for sexual purposes; engage in the sex trafficking of children; or travel across state lines or to foreign countries to sexually abuse children.

“Sexual exploitation of kids is gut-wrenching and involves unspeakable things that would shock the conscience of every one,” Landry said. “Operation Broken Heart sends a powerful message to predators across the country – law enforcement will find you and we will protect Louisiana’s children.”
Of the 63 suspects arrested between April 1 and May 31, 45 were charged for crimes associated with sexual abuse images and videos of children under the age of 13.