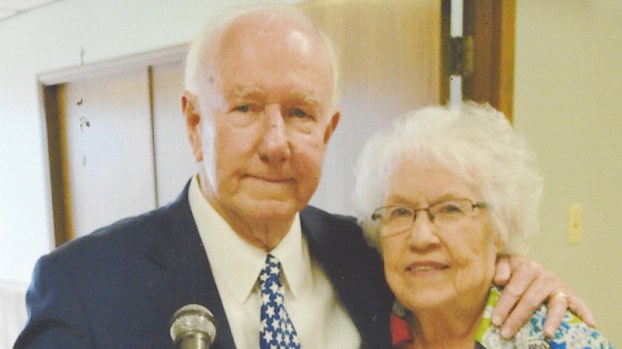 Harold and Jeanne Keller are pictured at this year's Get High On Life Memorial Day breakfast.

LAPLACE — Military personnel who died while serving in the United States Armed Forces were remembered and honored May 24 at the 21st annual Get High on Life Memorial Day Breakfast.

The event, which was free and open to the public, also paid tribute to the men and women of the River Parishes who have served our country.

Judge Sterling Snowdy, Kevin Aucoin, Dr. Samuel Miano, and Rocky Troxclair provided music throughout the breakfast, including a special melody of theme songs of the different branches of the military. Veterans in attendance stood as their respective branch’s song was played.

“We had the largest crowd we’ve had in the past five years,” said Harold Keller, Navy veteran and coordinator of the breakfast. Keller said that he hosted the first such event in 1998 when he saw a need to remember those who died in service to our country. “May we never take for granted the freedoms we have and the sacrifice of those who died fighting to defend those freedoms.”

Keller said he is grateful to the Brady Bunch for providing the delicious breakfast each year, and the American Legion for the use of the LaPlace facility.

RESERVE — The King of Rock and Roll is returning to St. John Theatre this month. Fans from near and... read more