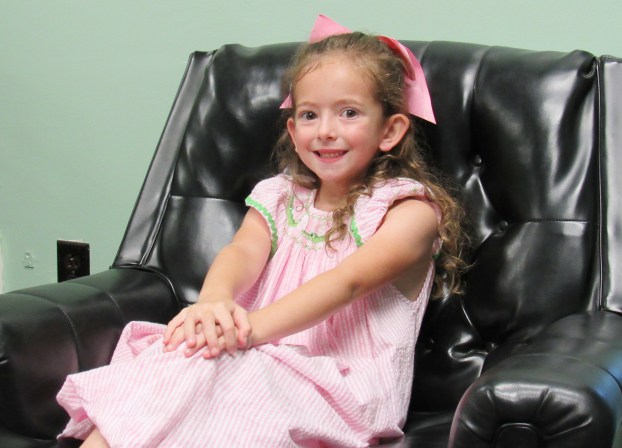 Shy at first, Izzy Prichard is a true go-getter in dance and on swim team.

LAPLACE — Little Isabella “Izzy” Prichard of LaPlace is timid when meeting someone new, preferring to take a step back and watch, but it doesn’t take long for her to step out of her shell and shine.

People might be surprised to see just how much she’s capable of in a spotlight dance routine or in a competitive swim meet. Even more impressive are the battles she continuously overcomes to live a normal childhood.

Izzy, 5, has endured two surgeries to correct a cleft palate that left the roof of her mouth an open hole at birth, according to her mother, Jaclyn Prichard.

“At the top of your mouth, you have a soft palate and a hard palate,” Prichard said. “Her soft palate wasn’t formed. They had to go in and put a flap there to separate it, because if not, everything comes out through the nose.”

Before Izzy’s first birthday, doctors discovered she had two brain aneurysms, which she still lives with day-to-day.

Characterized as the ballooning or swelling of blood vessels in the brain, Izzy’s aneurysms are unruptured. However, the diagnosis left questions on what activities she would be able to participate in.

Flying on an airplane was off the table, and neurologists suggested extreme caution with flips, jumps and other physical activities.

Those precautions didn’t stop Izzy from finding a love for dance and acrobatics.

“She was trying to flip off the couch, so I had to put her in an acrobatics class so that way they could teach her the proper way to do a flip so she doesn’t hurt herself,” Prichard said.

Izzy was in dance classes before turning 2, and she recently wrapped up her fourth year at Performing Arts Dance Academy in LaPlace.

Starting in July, she’ll take on faster paced routines in her first year of competition dance.

Izzy was asked to join competition at age 4, though her mother questioned whether she was too young to handle the responsibility.

Izzy Prichard signed up for her first year of competition dance this week. She’s taken recreational dance classes for 4 years.

“This year with dance, she really showed me that’s what she wants,” Prichard said. “It’s just her motivation, always wanting to go to practice. She’s always practicing at home. She would dance in stores whenever she hears music.”

Competitive swim is another new challenge for the summer. Izzy is practicing diligently with the Belle Terre Piranhas to compete in freestyle and learn backstroke, despite medical complications causing frequent ear infections.

Izzy battled ongoing ear infections for the entirety of summer 2018, even facing a busted eardrum on vacation before doctors inserted new tubes in her ears in October.

Through the pain, Izzy doesn’t complain much.

“I’m proud of how she’s grown,” Prichard said. “She’s just so strong. She doesn’t let anything hold her back.”

Diane Robichaux, occupational therapist for Early Steps of Louisiana, worked with Izzy until her third birthday to help develop her fine and gross motor skills. She’s impressed with how far her former patient has come.

“She was shy and quiet, didn’t really want to look up at people, or would get really embarrassed easily,” Robichaux said. “Now, she’s blossomed, goes on stage and performs in front of people. It’s a big change in her.”

Izzy recently completed kindergarten at Emily C. Watkins Elementary. Math is her favorite subject so far, and she’s excited to subtract, add and “count to almost 200.”

RTC and EATEL tie the knot

RESERVE — Reserve Telecommunications has expanded its reach from St. John the Baptist, St. James and northern Lafourche to a... read more