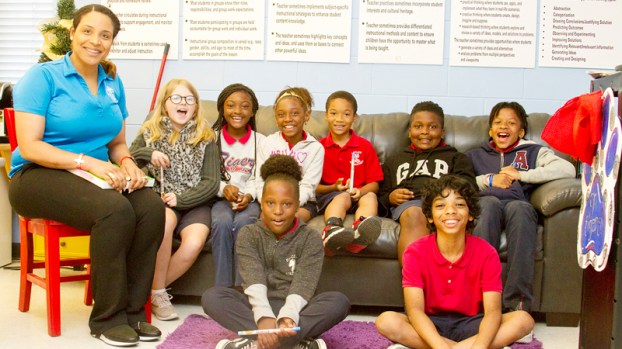 Tyra Duhé-Griffin, left, is joined by third and fourth graders at LaPlace Elementary.

Guided by the motto “I will not accept failure,” the LaPlace Elementary School master teacher established an independent summer school classroom inside of Becnel Law Firm in LaPlace.

She worked tirelessly from 7 a.m. to 5 p.m. throughout the summers of 2016 and 2017, getting approximately 100 students back on track and promoted to the next grade level in the process.

“I just wanted the kids to feel some type of success,” Duhé-Griffin said, adding it was vital to meet children at their level.

Each child took a pre-test to determine his or her individual needs. A post-test at the end of the summer determined whether they were ready to take on the next grade level.

Duhé-Griffin came out of pocket for snacks and classroom materials, including an iPad. More than 50 students participated per year, ranging from St. John the Baptist Parish public and private schools to St. Charles Parish, Jefferson Parish and beyond.

In the process, she built relationships with the children and learned their roadblocks in the classroom.

Tyra Duhé-Griffin, right, shares a laugh with her students at LaPlace Elementary.

“Sometimes when you have a child that’s struggling, it might be personality conflicts,” Duhé-Griffin said. “It could be the teacher and that student don’t have that type of relationship for the student to feel successful in that class.”

Duhé-Griffin is continuing her summer school outreach now that the program is once again funded through St. John Parish schools.

She’s never given up on year-round tutoring sessions to any child in need.

“Ms. Duhé had her when she was in fifth grade, and she really struggled with math,” Cammon said. “Ms. Duhé worked with her around the clock in order to get her where she is today. She’s in honors math in high school.”

Every educator has their own teaching style, Cammon said, noting Duhé-Griffin clicks with almost every student.

“She is very pleasing and will go out of her way to do anything she can for any kid and any adult that may need her,” Cammon said.

“She has a passion for the children.”

Attorney Nghana Lewis Gauff said Duhé-Griffin’s presence is felt loudly and quietly, from enthusiasm in the classroom to collecting clothes, shoes and food for families in need.

Neighborhood children who know her as “the math lady” ride bicycles to her house for homework help.

“I have kids whose parents can’t afford to send their kids to tutoring,” Duhé-Griffin said. “They call me after hours, and I will talk to them. I tell them, come to my house and ring the doorbell. Parents try to offer me money, but what’s an hour of my time after school?”

Visually focused lessons from her father, Henry Duhé Jr., sparked her love for math at an early age.

She obtained a computer science degree from Southern University at New Orleans and went on to work at a chemical refinery. Despite her success, she didn’t feel fulfilled until she was able to give back to her community in a more direct way.

“I took a cut in pay. A big one,” Duhé-Griffin said. “And then I realized, it isn’t always all about the money.

“That’s when I knew it was more of a calling. It was a vocation, and it was something I had to do. When I come to work, no matter what is bothering me, no matter how I feel about anything, this job is bigger than me. I’m doing God’s work.”

In 12 years with St. John Parish schools, Duhé-Griffin has learned all students are capable of success with a village of support.

Hospital team rallies to save patient; family called in priest for final goodbye before turnaround