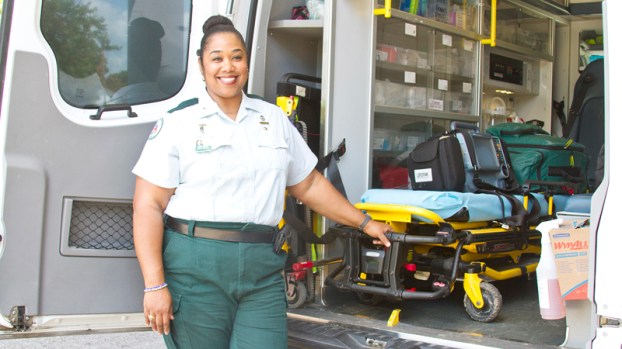 Acadian Ambulance Services operation manager Teddy Crochet describes Karen Layn Morris, above, as someone who steps up and get things back heading in the right direction.

EDGARD — Karen Layn Morris, emergency medical technician for Acadian Ambulance Services, learned early on how to focus through grief to save family, friends and other treasured members of her community.

There’s no place closer to Morris’ heart than her Edgard hometown, adding extra incentive to do her best in every emergency response.

Morris will celebrate her 20th anniversary with Acadian Ambulance Services on July 26.

The career demands strength, patience, a sense of clearheadedness and the ability to think quickly on one’s feet, according to Morris.

“I don’t just mean physical strength, but also a lot of emotional strength because everything isn’t going to be easy to deal with,” Morris said. “That’s compounded by working in your hometown. You feel every big situation personally. You also have to be able to separate yourself because you can easily get caught up with the grief of the moment and lose sight of your task. You have to be able to focus.”

One of the hardest responses in her career was on a day off, when her mother passed away. When the coroner arrived at the home, Morris was the one to run the EKG strip.

Morris fell into the EMT world by accident after returning to the United States from Germany. She’d previously attended Nicholls State University to study early education and earned stellar grades, but she couldn’t shake the feeling she wasn’t on the right path.

Her mother’s ailing health added to her decision to stick close to home. Once back in Edgard, her Uncle Ronald Mitchell, a lieutenant with the volunteer fire department at the time, suggested she look into emergency response.

Though Edgard is a relatively quiet area, Morris responds to three to five emergencies per 24-hour shift, starting and ending at 5:30 a.m.

Morris also dedicates time to the St. John Westside Volunteer Fire Department, where she serves as the medical officer and board of directors secretary.

“I’m there more in a supportive capacity, keeping an eye on the firefighters and making sure they stay safe and hydrated,” Morris said. “When a call is medical, that’s more or less when I take the lead.”

When Morris isn’t operating in a liaison capacity at West St. John, she’s cheering on the Rams at Friday night football games.

“One of my immediate supervisors would warn people working with me at the games, ‘If West St. John scores and she takes off running down the sidelines, don’t worry about it. She’s going to come back,’” Morris said. “Everybody knows my love for West St. John.”

“One of the things I look for and what I think is just a huge value to our company and giving back to the community is having hometown people that have a vested interest in doing a really good job,” Crochet said. “They not only see these people in their time of crisis. They see them in the grocery store and on the streets later on. She’s able to build that connection.”

Morris takes great pride in her work and the people she serves, according to Crochet.

“Karen is very outgoing,” Crochet said. “She’s very passionate. She’s outspoken. She’s positive, but she doesn’t hold her tongue. She’s not one to just sit by when things are not going right. She’ll step up and get things back on the right direction.”

Working as an EMT has taught Morris to value every moment, whether it’s spent with her 10-year-old daughter, Amina, or at St. John the Baptist Catholic Church.

“We’ve learned that unexpected things can cut our life short,” Morris said. “It taught me to appreciate life, and it taught me to be thankful for even the smallest things that God has blessed me with.”

LAPLACE — Jamaine “Jamie” Smith had just graduated from business college in the 1980s when she gave her niece a... read more