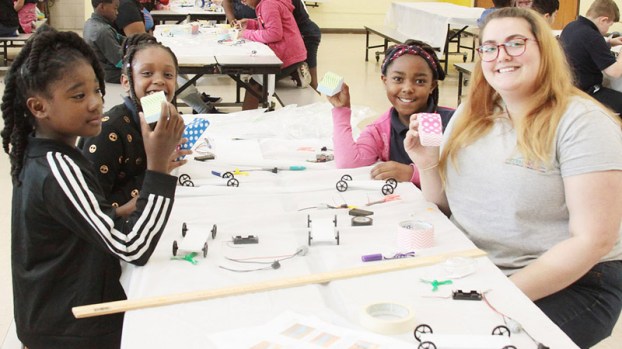 RESERVE — In social studies class at Fifth Ward Elementary, fourth grader Decori Fleming takes on the role of a senator and collaborates with classmates, rather than simply listening to his teacher read from the text.

Since stepping in as principal in August, Dr. Brandy Vaughn has heralded project-based learning, family involvement and attainable goal setting as steps to turning around Fifth Ward’s failing rating.

Vaughn is projecting a 6-point growth for the 2018-19 school year based upon student performance on interim exam assessments, most recently held in March.

Any amount of growth would mark the school’s first point increase in eight years, according to Vaughn.

With a new grading scale raising expectations for student performance, Vaughn said it would still take time to crawl out of the ‘F’ rating, though she feels it is moving in the right direction.

“We’ve had three checkpoints throughout the year, and we’ve seen steady growth,” Vaughn said. “We’re not looking for it to be exponential; we’re just looking for something. I am confident in the kids. They gave it their best. We’ve had heart-to-hearts, telling them this is important. We’re not what people say we are. We’re better than that.”

Lajaryen Keller displays some of the STEM tools he worked with this week.

Vaughn has watched Decori and other children bloom academically and socially throughout the school year.

“I enjoyed the LEAP test and the little pep talk they did because it really motivated me to try my best and hardest,” Decori said.

L’Oreal also cited LEAP testing as one of her favorite activities of the year, much to Vaughn’s surprise.

“I enjoyed that because it was easy,” L’Oreal said. “Now I can go to fourth grade.”

Corann appreciated the incentives she received for good work, including candy on LEAP testing days, a field trip in exchange for attending tutoring and a chance to participate in STEM Nola learning days.

As a reward for finishing LEAP, third and fourth graders worked with college students from STEM Nola Tuesday morning to create motorized racecars out of Styrofoam, mini turbines, wires and batteries.

The project reinforced classroom lessons about speed and velocity.

Days were set aside for each grade level to participate in a learning demo day, according to master teacher Anya Van Dyke. Since the program began in February, STEM Nola has visited the school eight times.

Vaughn said it’s one of the ways school administration is investing into education. She is also working with Barnes and Noble to stock the library with new books recommended by teachers, and future expansions could involve adding comfier furniture for a more inviting atmosphere.

“This year, the difference was we made many of the ways of learning to involve the kids,” Vaughn said. “We had more collaboration amongst the kids. A lot of the kids are dedicated to their education, and we reward them with stuff that they like. We give them opportunities to be social and present and use what they’ve learned in their academics.”

Parents have also been involved through a newly formed PTO, a daddy-daughter night, math night and LEAP kick-off night.

According to Vaughn, teacher cluster meetings and daily intervention blocks for all students sought to close achievement gaps across all subjects, with literacy being a primary focus.

“She makes learning fun,” Kaleb said. “She likes reading out loud and helping us read. If some kids don’t know the word, she’ll help them sound it out.”

Kindergartners began reading in September as opposed to January, as was previously the norm. Vaughn is proud to say 18 kindergartners are reading at a first grade level, with one student already reading second grade texts.

RESERVE — A local couple is behind bars, accused by police of leading large-quantity meth distribution throughout St. John the... read more