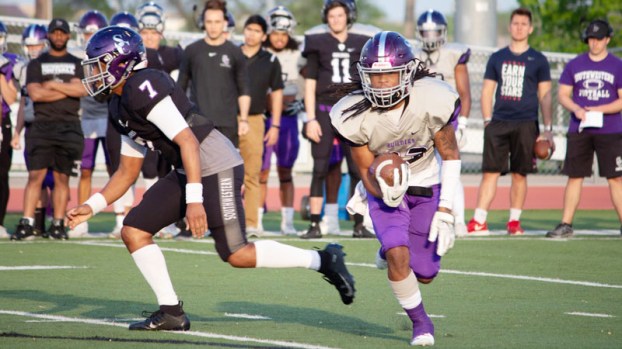 Shelvin Keller runs the ball for his Southwestern College football team during practice.

LAPLACE — Shelvin Keller was a coach’s dream and an even better person.

Unfortunately for the greater St. John the Baptist Parish community, Keller died Wednesday evening in a two-vehicle crash on his way home from school at Southwestern College in Kansas.

Keller and college teammate Jacobi Scott were killed as the result of injuries suffered in a crash with an 18-wheeler on Highway 59 near Marshall, Texas.

Foster said Keller was everything you wanted in a kid, “respectful, humble, smart. It’s just alarming, and it’s sad. He was determined to do better. Every time we talked, it was, ‘I love you, Coach. Thank you.’ It was just the person he was.”

Foster said he talked with his former player the last time he was home.

“I like, with my kids, to let them grow up a little bit,” Foster said. “I don’t want them to struggle being away from home. I would talk with him; check up on him. He said he liked it. He’s like my own child. They, your players, all are special to you, but he was a really special kid. We lost a good one. He was a model kid, and other kids should follow the way he lived his life.”

St. John Parish School Board member Shawn Wallace knew Keller as a hard and dedicated worker who was “very unique” and special.

“I follow these kids, all of them, and they know me personally just from being around a lot. In the school, he was liked real well by his peers. He was a good person in the classroom and on the football field, as well.”

“This news is distressing — our community is tightly knit, we all share in the tragic loss of these two bright, strong, young men,” Andrews said.