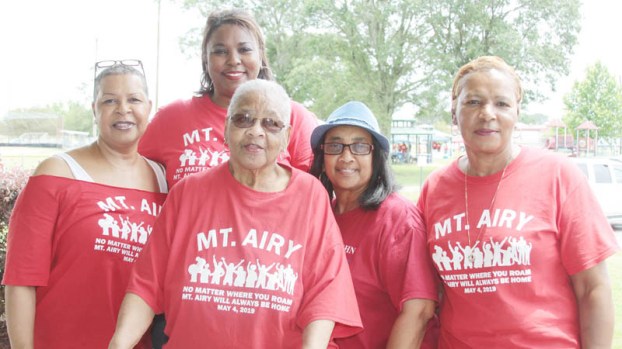 Mt. Airy generations from past & present come together for community celebration

The threat of inclement weather didn’t stop hundreds from gathering at Regala Park on Saturday and proudly wearing red shirts to say, “No matter where you roam, Mt. Airy will always be home.”

Charlene Grant, organizer for the inaugural Mt. Airy reunion, wanted to celebrate the spirit of a small town that has given back so much to its neighbors.

Nearly 500 current and former Mt. Airy residents called Grant for T-shirts leading up to the event.

Families competed against one another in baseball games and set up stations for barbecues and crawfish boils on park grounds. The day was filled with great food, music, children’s activities and a history station detailing the progress of the tiny, four-street town.

“We got tired of getting together for funerals and decided it was time to come together for a fun-filled event,” Grant said. “In Mt. Airy, when one hurts, we all hurt. We help each other, and that’s what our celebration is about.”

Brunette Alexis was among that rank, and she’s happy to see the next generation stepping up to represent Mt. Airy.

“I just was so glad and so proud when these young people thought to do what they are doing now,” Alexis said. “I’m so glad because I feel Mt. Airy has been an example for the black people in this parish. They’re carrying on what they’ve seen others do.”

Alexis described Mt. Airy as a small town of extended family with an emphasis on education.

In a notebook, Alexis keeps a list of all the people from Mt. Airy who graduated from college and went on to pursue professions in their chosen fields.

Her college grad list includes “at least 110 names,” and there are several more she became aware of during Saturday’s reunion.

Nestled between Garyville and Gramercy, Mt. Airy was formed near a neighboring plantation. What originally started as a single street expanded to four streets over time, Alexis said.

According to Leana Nelson, many of Mt. Airy’s families are descendants of Alexis Marqueze and Catherine Chenet Marqueze, who emigrated from the French Caribbean colony of Saint-Dominique as free people of color.

“We come from a close-knit community that has always been about love, family and unity,” Claudette said. “Coming from a four-street town, we have almost 150 college graduates because everyone lifted each other up instead of tearing each other down. We are second-to-none in whatever profession we are in and deeply rooted in the love of Christ.”

“Look around, and I can guarantee there is nothing here but true love,” Claudette said. “Mt. Airy is truly the village.”

Kenneth Bardell said the reunion attracted visitors returning home from as far away as California. He said it’s important for the community to preserve the town’s history, especially considering older figures of the community have passed on, while many of the children move away after college.

Grant plans to host an annual reunion to keep the community thriving.

Superintendent’s future unclear; School Board member asks: “Who is running the district?”

RESERVE — Who is running the day-to-day operations for St. John the Baptist Parish Public Schools? That question was asked... read more