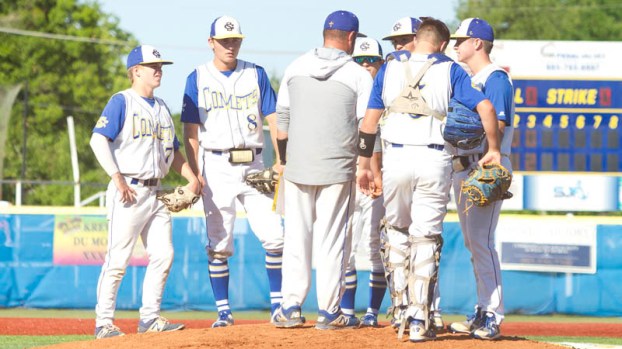 St. Charles Catholic coach Wayne Stein, seen talking to his Comets earlier this postseason during a mound visit, has been impressed with his pitchers during the playoffs, adding “We’re in it to make a run to the state championship.”

SULPHUR — Cheers erupted and a dogpile formed on the field Sunday evening as the St. Charles Catholic baseball team upset three-time defending state champion Teurlings Catholic in a best-of-three series to secure a spot in the Division II semifinals.

The Comets are heading to Sulphur for the fourth time in five years, ready for a 7 p.m. Thursday game against No. 2 seeded St. Thomas More.

If the game ends in an SCC victory, the No. 6 Comets advance to Saturday’s state championship game alongside the winner of Thursday’s meeting of No. 1 University Lab and No. 5 Parkview Baptist.

St. Charles Catholic coach Wayne Stein said the Comets and the St. Thomas More Cougars have not met many times in the past decade.

“We are not very familiar with them,” Stein said. “In fact, we have not played in quite a long time. I think we played years back in a tournament, but I know they are a very good ball club. I know they have some great players.”

St. Thomas More is coming off of a weekend best-of-three series win against E.D. White. An explosive eight-run fifth inning propelled the Cougars to an 8-4 win and a ticket to the semifinals.

At the plate, Andrew Guidry shined with a grand slam, while Josh Stevenson contributed three hits and an RBI.

The Cougars are on a 20-game win steak under the leadership of coach Gary Perkins.

The Comets, 29-8 for the season, are relying on quality pitching from Kaile Levatino, Nick Lorio and Caleb St. Martin.

“We’re not in this thing just to beat Teurlings Catholic,” Stein said. “We’re in it to make a run to the state championship. By no means do we think that it’s over. We’re going to go compete and give ourselves a chance to win the next game.”

Stein is proud of his pitching staff and defensive players for overcoming intense pressure from Teurlings Catholic.

Friday’s game ended in a 1-0 loss, and Saturday games were postponed in advance of anticipated severe weather.

Field conditions were perfect on Sunday when the Comets returned with a vengeance for a double-header sweep, 3-2 and 2-1.

The Comets led until the top of the seventh in Sunday’s first game, when the Rebels crushed a two-run homerun and tied the game.

SCC answered with Nick Lorio and Eli Ory each getting on base, and Joe Chiarella connecting on a walk-off base hit to force a third game.

St. Martin went the distance in game three, giving up only five hits to earn the clinching win.

“We left some opportunities out there, but I think Teurlings Catholic’s pitching staff had a lot to do with that,” Stein said. “I can’t say enough about our pitching staff. Our three guys that were on a roll the whole year really pitched exceptionally. We’re just excited to still be alive. We know we’ve still got work to do.”

The energy was “phenomenal” and the Comets nation was out in full force, according to Stein.

He hopes to see a stronger showing from his hitters in the semifinal round.