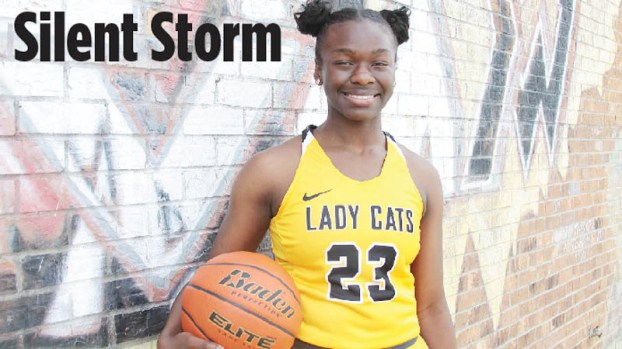 Equipped with a full scholarship, Jackson is heading to Texas to make waves on the Wiley College women’s basketball team.

James took note of Jackson’s work ethic in summer competition before her sophomore year. Over time, she grew into a leading force for the Lady Cats, scoring more than 1,000 points in her career.

Jackson averaged 21 points, 10 rebounds and four steals per game in 2018-19 season, leading her team in all areas except for assists.

Her performance on the court and in the classroom led to all district defensive MVP and academic all state recognitions. Jackson was selected by her coach to play in a senior all-star game, where she received another MVP title.

“She’s a young lady of very few words,” James said. “She doesn’t do a whole lot of talking. You would almost think that’s how her game would be – kind of nonchalant. She’s quiet and soft-spoken but tenacious and very aggressive on the court, and that’s why I say she’s a silent storm.”

James likes to challenge her by putting teammates to run against her in practice and telling them, “Don’t let Kayja beat you.”

“When I say that, she turns it up two more notches,” James said. “She takes the approach that nobody is going to beat her.”

Jackson sees basketball as a way to overcome roadblocks in her life.

“I enjoy playing and being around my teammates because it’s fun and it helps me with life,” Jackson said. “It helps me get through obstacles. When you’re going through stuff, you can just go to the gym to get your mind off of it.”

At East St. John, she had the opportunity to play under her father, assistant coach Kirwin Jackson. She feels the Lady Cats prepared her well, and she looks forward to proving her worth as a defensive standout at Wiley College.

A full-ride scholarship drew her in, and a visit to Texas familiarized her with the team.

“I got to watch the team play,” Jackson said. “I would describe it as fun, a lot of energy and a lot of school spirit.”

Her first goal is to get on the floor as a freshman and contribute as much as she can.

While at Wiley College, Jackson plans to study kinesiology in hopes of becoming a physical therapist.

She got insight into the medical field in a pharmacy tech program at East St. John, available to students in good academic standing.

“Just to come in and have a 4.0 gpa, being able to play basketball and do well says a lot about her,” James said. “She’s a phenomenal student; phenomenal athlete; all around good player.”

Jackson is the daughter of Kirwin and Lyndell Jackson of LaPlace.