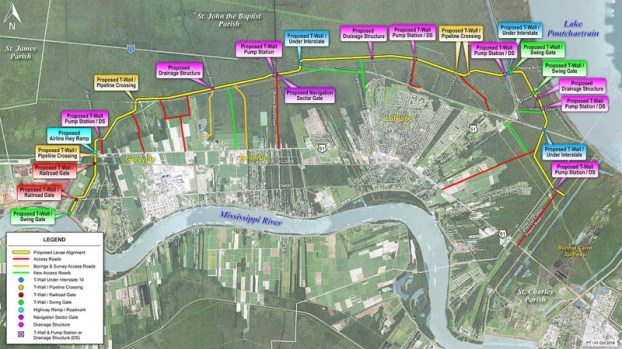 A basic mock up of the West Shore Lake Pontchartrain levee,

LAPLACE — Laying groundwork for the West Shore Levee has been a slow and tedious process, but project manager Chris Gilmore said every step is vital to ensure storm protection for more than 100,000 River Region residents within five years.

A late 2023 completion pinpointed when funding was allocated in August shifted to an early 2024 estimation, according to a February update by the U.S. Army Corps of Engineers.

Gilmore said there have been no major deviations to the timeline since then or cost projections pushing the project over the $760 million allocated by the federal government in July.

However, this spring’s planned launch of detailed design mapping has been pushed to the fall.

According to Gilmore, Louisiana Wildlife and Fisheries is the last unfilled piece in the right-of-entry puzzle that began in late 2018. The Corps expects to gain entry in one to two weeks and move onto tree clearing for land surveys and soil borings within two months.

Results from the borings fuel the design portion by detailing what the land can sustain.

“It’s going very well,” Gilmore said. “I would say any project of this size is kind of like trying to push a boulder. It takes a lot of effort, but once it gets rolling, it’s much easier. We are just now getting that boulder rolling.”

Survey begins about a month after tree clearing begins, and Gilmore said clearing and surveying operate on approximately 150-day timelines.

Design work should begin in the early fall and last approximately 10 months.

Flood walls are needed wherever the levee crosses pipelines buried in the marsh, and flood gates allow roads and railroad tracks in the levee’s path to open for everyday use and close when a storm approaches.

Once packaged together, the designs will be shown to potential bidders to award 15 to 20 construction contracts. The first contract could be awarded by early 2020.

Gilmore said construction is handled in segments, meaning some parts of the levee would be complete well before 2024.

Since August, the Corps has reported a two-year planning, three-year construction plan.

Sorapuru noted the Parish Council has not received monthly updates from Gilmore since December as previously discussed, leaving questions over St. John’s role in funding for construction and update of the levee.

“The Corps of Engineers, they really haven’t been totally upfront with everything that’s trying to take place,” Sorapuru said. “I just think we need to have some legal at the table to do some assessment on the process that’s taking place.”

“The meetings have been scaled back because there have been a lot of unproductive discussions going on because they are in the early stages right now,” Dufrene said. “As of right now, there is no action for the parish to take because they don’t even know where they’re putting these things.”

According to Dufrene, the levee alignment has shifted several times.

Dufrene is communicating with West Shore Levee leaders and sees opportunity for the Corps to place pump stations at the site of canals already set to be cleared in separate projects.

There is potential for more pump stations to be added near residential areas of LaPlace, according to Parish President Natalie Robottom.

Hydraulics are being evaluated, according to Gilmore, though there is no word yet how many stations are needed.

Robottom plans to reach out to non-federal partners to get St. John Parish more engaged in the process. She said meetings in the past have lasted 15 minutes and brought St. John Parish no closer to a delineation of responsibilities.

“I’m not going back to a meeting at the levee district because that was not productive for me, so I’m going to go to somebody’s boss,” Robottom said.

The West Shore Levee Project includes construction of an 18.5-mile levee system around the communities of Montz, LaPlace, Reserve and Garyville.

The levee would be built to a 2070 design elevation for anticipated sea level rise.