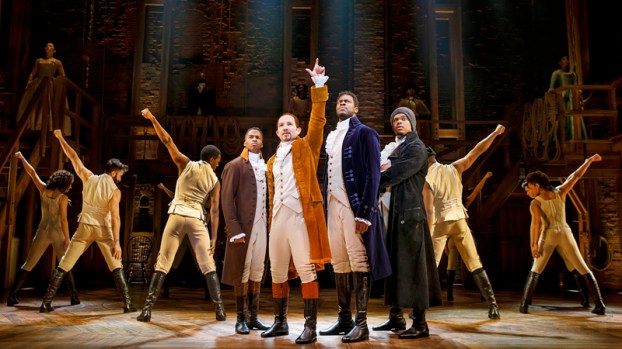 Joseph Morales and Nik Walker will lead the second national tour of Hamilton as Alexander Hamilton and Aaron Burr, respectively.

Duncan was among 51 STEM school students to attend a matinee performance of the wildly popular Hamilton musical at the Saenger Theatre last week, following weeks of classroom study within an integrated curriculum.

STEM students were the only St. John Parish representatives among 2,600 students and teachers from 41 high schools.

Before the matinee, students stood under the spotlight on the grand stage and performed monologues, poetry, songs and skits. Much like Hamilton creator Lin-Manuel Miranda utilized Alexander Hamilton’s biography to write scenes and lyrics, STEM students Sara Brooks and Alissa Stutzman researched the Boston Tea Party to write their own interpretation.

Standing on stage, Brooks and Stutzman added a slide whistle for comedic timing as they opened with banter on “immature men” and the rash reactions that led to 46 tons of tea being dumped into Boston Harbor.

“I could tell they researched the information because they rephrased it to a better way you could understand it,” Duncan said. “They used comedy and made you think about the event in a different way.”

According to STEM teacher Angela Bradford, the class curriculum used Hamilton as inspiration to delve into primary source documents.

“It’s difficult for students to connect with primary sources when the language can be different and the vocabulary is different,” Bradford said. “Lin-Manuel Miranda really used these concepts of words and expressed them in a way that is very accessible to young people. That is one of the reasons why Hamilton is so popular. It breaks these ideas down in ways that students can connect when they previously had not.”

For his class project, Wilson chose to compose a skit on John Laurens and the origin of black military regiments. Researching was fun, according to Wilson, but he was most impressed by the live matinee at the Saenger and the student performances that preceded it.

Wilson knows the feeling of performing on a stage, and it made him proud to see others command the stage with the power of their words.

“They have these spotlights, and you can’t see anyone else at all,” Wilson said. “It was my first time being there, and, oh my goodness, it was beautiful. I think it’s something everybody should be able to experience. Not a lot of people have that opportunity.”

Tickets for the educational partnership were available for $70, $60 of which was subsidized through partnerships so each student paid only $10.

Duncan loved walking into the Saenger Theatre for the first time, a sight he described as “something you would only see in movies.”

In the week that has passed, he hasn’t been able to get the HAMILTON soundtrack out of his head.

Freshman Natysha George felt uncertain about attending but she was moved almost to the point of tears watching a student from another school perform an emotional song about the Founding era.

In class, she and a partner used some of the elements seen in the musical to compose a poem about Phyllis Wheatley, an African American poet born into slavery.

“It doesn’t have to rhyme; you just need the rhythm,” George said, noting reading the poem aloud helps the editing process.

One of the class presentations involved an epic rap battle between students playing Alexander Hamilton and Aaron Burr, according to Bradford.

A mix of students from Louisiana schools stand on the Hamilton stage.

RESERVE — Louisiana Premier Charter School’s hope for local approval to open on the campus of Riverside Academy will have... read more